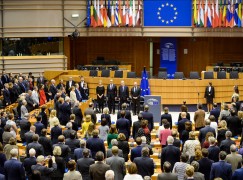 Your last chance to vote for EU song book

They are compiling an album of songs to represent each state.

If next week’s outcome is Brexit, we’re out (unless you believe that Brexit will change nothing).

Read press release below, and click on the link to vote now.

With less than a week to go until the polls open for the EU referendum, the British public are being invited to participate in another European decision – on which six songs will represent the UK in the inaugural European Union Songbook.

Founded in Copenhagen last year, the European Union Songbook aims to showcase the best music to have originated in all 28 EU member states throughout history, combining national sentiments with an underlying European identity.

Already more than 13,000 EU citizens from Denmark, Germany, Sweden, Austria, Greece, Latvia and Cyprus have voted and chosen their songs, with the UK vote opening on Tuesday 14 June and closing on Thursday 14 July.

34 songs representative of Britain and its musical heritage have made the UK shortlist, following a vote last year by music teachers and students from British music academies.

« Why sleeping with the maestro is a bad idea