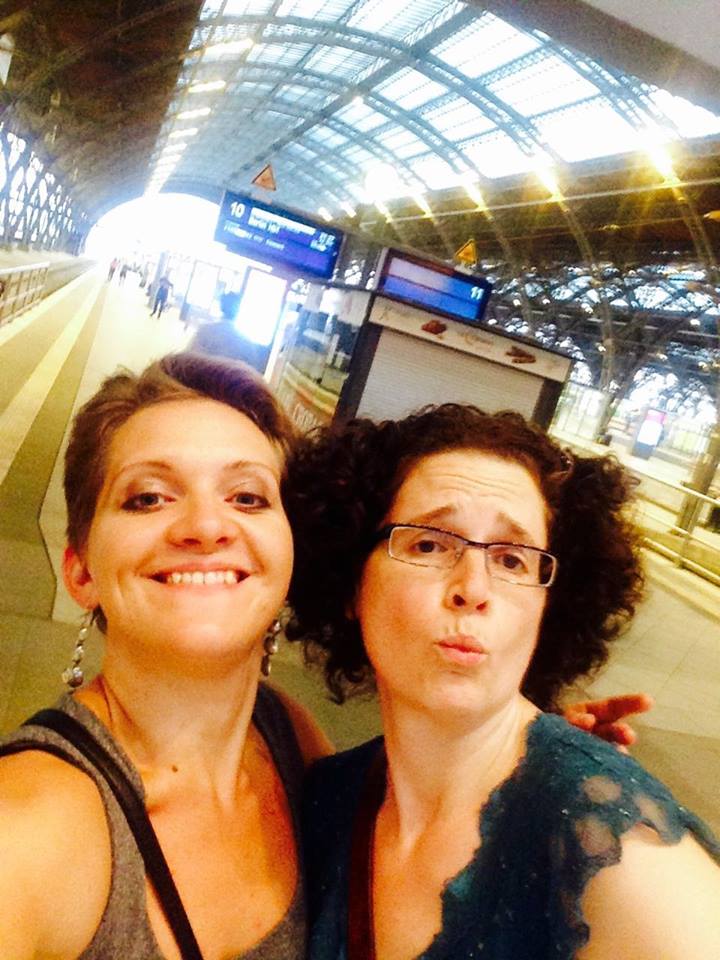 Who says classical musicians have to be so serious?

Anthea Kreston (pictured right), American violinist in the Berlin-based Artemis Quartet, has come up against an age-old misconception – that if the music is momentous the musicians must have equivalent gravitas.

How on earth do we claim the freedom to be normal, frivolous people?

Does being a classical musician mean you have to maintain a sheen of sophistication?  After moving to Europe (and beginning this diary) I have often wondered this.  Obviously I believe that the sophistication of a chamber music career can live hand-in-hand with a regular persons’ life. And certainly this diary (partially because I write it so quickly) is not sophisticated. My German tutor and I talked the other week about perceptions of private vs. public life in Europe (as opposed to North America).  Almost everyone says they like to read this Slipped Disc Diary – they are surprised by the rawness and honesty – that it relates to their own lives as musicians and humans.  Does this conflict with a serious classical music stage persona?  Can a person have an intense work ethic, sense of humor, a love of the ridiculous, a complex intellectual relationship with classical music, an in-control and passionate performance style, and still be a normal person who gets runny noses and is late getting her daughter from kindergarten?

As a person, I love to play with and engage the line between hoity-toity and hoi-poloi.  I have, myself, lived both extremes of this – having grown up with as many choices as a person could have (thanks, mom, for the two years at Mrs. Wilson’s Ballroom Dancing, extra-curricular oil and water color classes, horseback riding school, archery, stained glass and quilt-making classes and museum-filled vacations).  I have also lived in my share of grungy, roach infested apartments, living on bulk dried beans and rice and working multiple jobs to make rent.

My jobs ran the gamut of strolling violin on Wednesdays all-you-can-eat buffet night at Donatelli’s Italian Restaurant outside of Minneapolis, to library work at Curtis and reading the Wall Street Journal to a blind aristocrat every morning of the week. I have also done more glamorous things – but these first things were what shaped me most of all. I have driven across the United States by myself several times (the first, in my rusty Buick Skylark from Cleveland to Portland (40 hours) to attend a home birth by a high-school friend who was living in a commune in Oregon). I have also busked and camped my way across Europe three times (once solo).

One of my favorite things was getting on the sub list for the Minnesota Orchestra at age 17 (thanks, oldest sister, for teaching me how to prepare excerpts!).  Luckily, this was behind a screen so they could not see my age. My first call was for a PDQ Bach concert. I sat last chair second violin, and the most incredible thing happened. I turned the page, and there it was – a cadenza for last chair second violin. Just up my alley. After this, I was able to live more comfortably and was able to buy my plane ticket to Philadelphia to audition at Curtis, where I transferred the next year.

But I never gave up Donatelli’s during my Minneapolis years. Strolling violin is hard work – three hours of requests from Broadway to Paganini. I remember my audition for the job. I had saved only enough money to live for 3 weeks in Minneapolis. In that time I was going to have to find a job which supported me through college. Week two rolled around and no luck so far – but a friend handed me a clipping from the “help wanted” section of the newspaper. I called and set up a time to meet at the restaurant. In the mean time I went to the music library and copied a bunch of Italian street tunes and opera tunes as well as things from popular musicals, and memorized them. I am a Suzuki baby, so playing by ear is something I can do passingly well. I showed up, in my best clothes, and lied about my age. I said I was 21, and had been strolling in Chicago “for years”.  I had calculated my cost of living and after playing for them, named my price (in cash).  They looked at me, and said “that is triple the price we pay now”, and I said, “you have my number, call me if you want me”.  I knew that this was the way I could make it – it would be impossible for me to get a job at age 16 which could support me and still give me the time to attend college full time and practice.

Guess what?  They called the next day. They became a kind-of surrogate family to me over the next two years. And I ate more on Wednesday nights than any other day of the week.

So – what about classical music?  Should it be portrayed as something by and for those with a sheen of perfection?  Point out any musician and I am certain that their path has enough juicy stories to fill a book. That is what gives us the passion on stage – we have had the struggle and the subsequent successes. We can speak to the donors and to the students. We can attend galas and kindergartens. We have all been starving musicians, and we have the desire and work-ethic to survive and flourish. Erasmus observed, “The chief happiness for a man is to be what he is”.  To be true to myself, with all of my inconsistencies – this is my goal.

« What hope for music critics in click-chase newspapers?

Groper is fired by Salzburg Mozarteum »