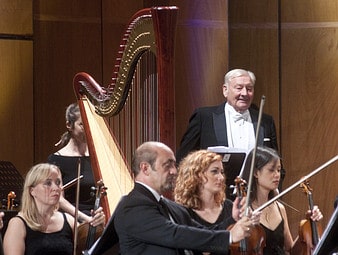 San Diego Opera has been notified by the family that the Italian conductor Edoardo Muller passed away yesterday at the age of 78.

Edoardo Muller (or Müller) made his San Diego Opera debut in 1980, conducting the West Coast premiere of Giovanna d’Arco. Over the years he conducted over 30 San Diego Opera productions until ill-health forced his retirement in 2011.

Trieste born, he made his way as assistant to Serafin, Gui, Votto, Böhm, Molinari-Pradelli, Abbado, Kleiber and Muti, getting his breakthrough jumping in for Georges Pretre in Rossini’s Mosè at the 1973 inauguration of the Maggio Musicale Fiorentino.

He went on to conduct at La Scala, Paris, Munich, Barcelona, Tokyo, Buenos Aires, Rio de Janeiro, Santiago de Chile, Montreal and most Italian opera houses. In the US he worked at the Met, Chicago, Philadelphia, Houston, Seattle, Washington, Dallas, Detroit and more.

He was a frequent recital partner with Renata Tebaldi, Carreras, Obraszova, Bruson, Bergonzi and Caballé.

In San Diego he is remembered for his humour, warmth, passion, and incredible repertoire knowledge. He had been ill for some time, and was in a coma in his final days.