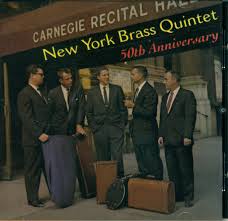 From the International Trumpet Guild:

Robert E. Nagel Jr., trumpeter, composer, arranger, founder of the New York Brass Quintet, and founding member of the International Trumpet Guild, passed away June 5th at the age of 91. He had an illustrious career as a trumpet player, teacher, composer, conductor, arranger, and was a pioneer of brass chamber music.

Nagel was born in Freeland, Pennsylvania, on September 29, 1924. He began studying the trumpet at the age of 8. As a child prodigy, he was featured on national radio playing a cornet solo with the Armco band conducted by Frank Simon at the age of 13. While in high school he also studied piano and composition. He attended the Juilliard School of Music for one year before entering the army, where he played in the West Point band for 3 years. After returning to Juilliard, he studied composition with Peter Mennin and Vincent Persichetti. For several summers he was a student at Tanglewood where he studied trumpet with George Mager of the Boston Symphony and composition with Aaron Copland.

Upon completing his studies at Juilliard he was appointed first trumpet of the Little Orchestra Society in NYC. This appointment launched a freelance career that lasted over twenty years.  During this time he played with conductors Leopold Stokowski, Leonard Bernstein, Pablo Casals, and Igor Stravinsky. He recorded extensively with CBS, RCA Victor, NBC, and MGM.  Among these are many iconic recordings, including the 1961 recording of L’Histoire Du Soldat, conducted by Igor Stravinsky, and the Brandenburg no. 2, by J. S. Bach, conducted by Pablo Casals.  He performed with the Bach aria group, the Contemporary Chamber Ensemble, the Casals Festival in Puerto Rico, Yale at Norfolk, and the Aspen Music Festival.

Perhaps his most enduring contribution to music was in the area of brass chamber music. He was the founder and director of the New York Brass Quintet. For over thirty years, the NYBQ performed across the US and Europe. He commissioned numerous works for the brass quintet and was a founder of the International Trumpet Guild and recipient of the prestigious ITG Honorary Award.  As a composer he has written for orchestra, chamber music, trumpet method books, and arranged solo and ensemble music.  To promote brass chamber music he launched his own publishing company, Mentor Music, in 1959.

Funeral services will take place in Forest Hills, Maryland.  In lieu of flowers donations can be made to the Gideons.