On Tuesday 28th June the London Musical Theatre Orchestra (LMTO) will be hosting its inaugural gala evening which will also serve as the launch for its first professional season of orchestral performances set to take place between September 2016 and February 2017.

Within the splendour of the Great Hall at Bishopsgate Institute, this gala event— held for guests, patrons and members of the press— will premiere LMTO’s professional orchestra who will play alongside a star West End cast. The finale of the event will be the unveiling of LMTO’s first season of pubic concerts, with the professional orchestra, which will then go on sale.

LMTO is an orchestra which specialises in the performance of Musical Theatre repertoire. The organisation, which boasts over 1,000 musicians and singers, has until now acted as a rehearsal orchestra, assembling monthly, without an audience, to develop players’ repertoire and pit playing skills by playing through an entire show. The organisation has now formed a separate professional Orchestra with which it will undertake public concerts throughout the year; ready to take centre stage as a groundbreaking, one of its kind, London based professional orchestra.

LMTO’s objectives are rooted firmly in the advancement of the art of Musical Theatre for everyone. Its new professional orchestra will comprise some of the world’s greatest musicians with an enthusiasm for musical theatre, who will play alongside the most talented and promising musicians from the rehearsal orchestra. The result is an enriched, passionate and joyous season of musicals in concert, played by musicians that love to play musicals. The depth of character this unique ensemble of musicians bring serves to not only make full orchestral performances accessible to brand new audiences, but also to bring the exciting repertoire of musical theatre to a more traditional orchestral audience.

The launch will showcase the extraordinary versatility of LMTO, bouncing from the great tunes of the 1950s to the rock/pop scores of the last ten years. As a proud supporter of new work the launch will also feature a premiere of an orchestration of a recently debuted British musical, orchestrated by the Broadway & West End legend William David Brohn (Wicked, Mary Poppins, Miss Saigon).

LMTO is the brainchild of Freddie Tapner, Musical Director and Founder of the ensemble. Having graduated from Pembroke College, Cambridge with a First Class Degree in Engineering in 2014, he moved straight to London to pursue a career in Musical Theatre. 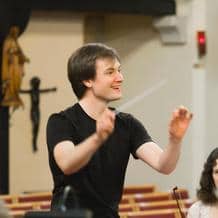