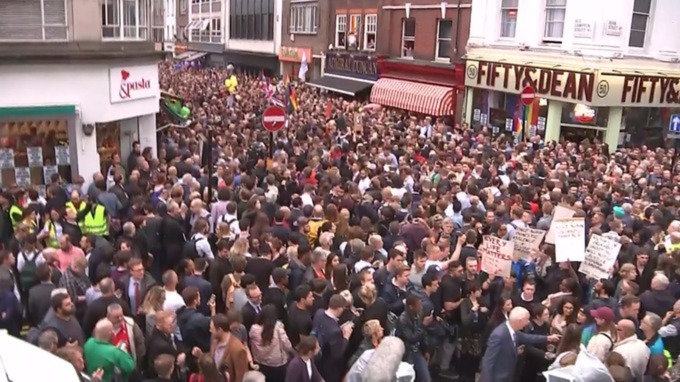 After singing at the Orlando vigil two days ago, the chorus have rush-released a two-track single, all proceeds to the Orlando victims and Galop (an anti LGBT-hate crime charity).

Watch those diverse faces in the choir.

In 1991, nine friends came together to sing a few Christmas carols at Angel Underground Station

hoping to raise a few pounds for the Terrence Higgins Trust. London was in the midst of the AIDS crisis

and the men, who belonged to a social group called London Friend sang together to find a place of

support, of friendship and of brotherhood. Little did they know what they had kickstarted.

Fast­forward 25 years later, and this once small band of singers now calls itself the London Gay Men’s

Chorus. Boasting over 200 members, the LGMC is the largest gay choir in Europe and regularly plays

to sellout crowds at Southbank Centre, Cadogan Hall and the Roundhouse. Over the years, the chorus

Children In Need, Comic Relief, The One Show, The Graham Norton Show and Top of the Pops.

Itzhak Perlman says life will be ‘impossible’ under President Trump »