Sergey Neller, 30, a Russian who came second in this year’s Gustav Mahler Conducting Competition, has been snapped up by mega-agency IMG.

(The winner was a Singaporean, Kah Chun Wong.) 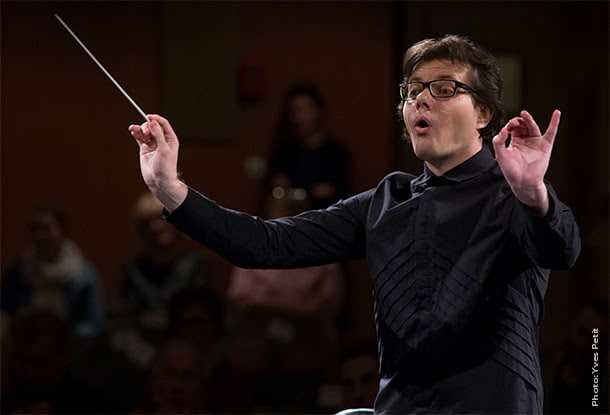 Neller said: ‘I’ve always wanted to work with a manager who would be able to get almost 100% into my mind. Of course I thought, this is not possible, that guy doesn’t exist. Fortunately I was wrong. When I met (IMG’s) Grant (Chaput) at the Bamberg Symphony Mahler Conducting Competition I realized he is the one I’ve been looking for. I’m certain we will do a great job together.’

Terry Teachout writes: Is it time for the Metropolitan Opera to look elsewhere for fresh thinking? Or is the company simply too cost-diseased to thrive in a market where consumer demand for big-ticket opera, the only product that the Met can successfully produce, appears to be inching inexorably downward? I have a sinking feeling that we’re going to find out…soon.

New Jersey Symphony Orchestra has appointed Gabriel van Aalst to be its President & CEO, starting in October. Gabriel has been chief exec of the Academy of St Martin in the Fields, the London chamber ensemble where Joshua Bell is artistic director.

Before that, he worked for the Australian Chamber Orchestra. 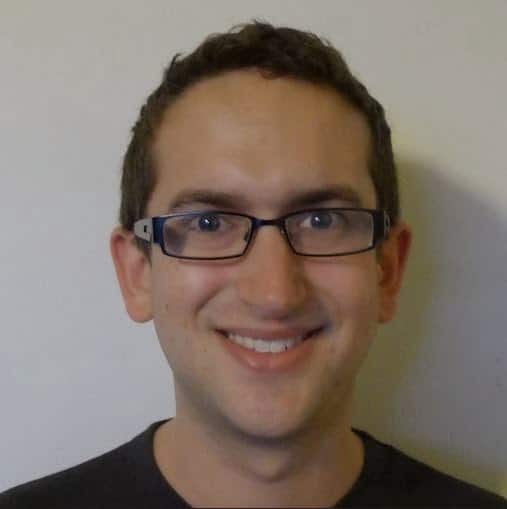 When Wai Kit Leung, a reviewer on MusicWeb International, received a new release by Katherine Needleman, principal oboe of the Baltimore Symphony Orchestra, he was none too enthusiastic.

But what followed was a hate storm of social media messages from the oboe community, attacking the reviewer, his personal status and his business. It has been the talk of the oboe world all month.

A few lone voices piped up in defence of free speech, among them Robert von Bahr, owner of the indepepndent BIS label, who wrote that ‘Mr Leung has written an exemplary review’ and went on to say why.

But when Mr Leung sought support from Len Mullenger, owner of the review site, he was told that MusicWeb ‘cannot cope with the distraction of dealing with numerous incoming e-mails from myself, the artists and artist’s friends’ and that his services would not be required in future.

Music Web went on to post an equivocal comment to the foot of the review: MusicWeb International acknowledges the controversy created by this review, and the negative comments made therein.  We support our reviewers’ right to be honest in their assessment of a recording, as long as they support their opinions; this has been done very thoroughly here.

There are two disturbing aspects to this ugly little episode:

1 If, as Mr Leung alleges, Ms Needleman organised an online hate mob, that is reprehensible conduct. Every artist learns to cope with bad reviews. Ms Needleman has been principal in Baltimore since 2003. She’s experienced enough to take a few knocks and bounce back. Slipped Disc invites her response to these events.

2 If Mr Leung was sacked because the website could not bear a swarm of angry oboists, that becomes a credibility issue for Mr Mullenger and an existential one for MusicWeb. They, too, are welcome to respond.

Now go ahead and read the full story from Mr Leung’s standpoint here.

I started reviewing CDs and DVDs for MusicWeb International, a UK-based classical music review site, in February this year. Shortly after I started, I was assigned to review, among other discs, the debut album of American oboist Katherine Needleman on Genuin. Being an oboist, I was aware of the potential pitfall of passing judgement on a fellow oboist. A quick search on Amazon.com revealed that this disc had garnered an unusually high number of  positive reviews (all 5-out- of-5) within days of its launch.

With that knowledge, I thought it would be safe for me to proceed.

The disc turned out to be a disappointment to me. Being a conscious reviewer and told by my team that I should be honest with my opinion, good or bad; I wrote a somewhat critical review of the album, detailing what I liked and what I didn’t like. Bearing in mind the number of 5-star reviews the album had earned on the US Amazon site, I wanted to be inclusive of those listeners’ opinions, and added a sentence at the end: “Get this album if you want David Ludwig’s Pleiades or if you are a fan of the American style of oboe playing”.

I had qualms about writing a less-than- stellar review, but the Editor-in- Chief vetted it and had it posted on MusicWeb. Later I showed the review to at least eight other reviewers from MusicWeb, as well as to Len Mullenger, MusicWeb’s Founder. All of them told me my review was fine. Mr. Mullenger told me he “cannot really see anything he thinks needs changing”. Genuin must have endorsed the review as well as they quoted it on the official product page. 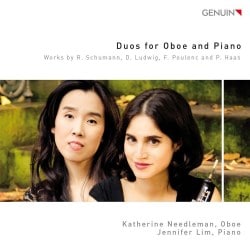 Ms. Needleman, however, took offence at my review. She hunted me down on Facebook, and repeatedly tried to drag me into dog fights with her and her fans/friends. When I refused, she proceeded to broadcast misleading and inflaming messages (“ … So not only does he insult me, which I find rather amusing in this case, but in his quite amazing review, he insults an entire nation or perhaps continent of oboe players as well.…”) to multiple Facebook groups, including the “Oboists of the World” group and the official Facebook page of the International Double Reed Society, with a combined membership of over 10,000. She also broadcast my private company info in her posts.

Within minutes I got insults, abuses and threats from dozens of Ms. Needleman’s fans and friends. They dug up my photos and company info and posted them on thread, threatened to boycott my company and asked others to do so as well.  “Atlantic Woodwindrepair” (bassoonist Rick Shepard) posted that he had sent emails to MusicWeb’s Editor-in- Chief and Founder, asking for my dismissal, and asked others to do the same.

The following day, Len Mullenger told me MusicWeb “cannot cope with the distraction of dealing with numerous incoming e-mails from myself, the artists and artist’s friends”, and dismissed me. This is the same person who reassured me a day earlier that he didn’t see anything wrong with my review. He also made several allegations against me, none of which I had heard from anyone from MusicWeb before, and to me clearly remarks Ms. Needleman and her fans/friends made in their email campaign.

The attacks on Facebook continued for another week. Several people, most importantly Robert von Bahr of BIS Records, joined the debate and pointed out to the crowd that it was my duty and right as a reviewer to write my review, and that the crowd’s and Ms. Needleman’s behaviour was undignified. However, the mob continued their abuse. Most of these posters had not even heard the album, but that didn’t stop them from insulting me. Very few actually debated the points I made in the review. Interestingly, when a few passers-by saw enough, jumped in and reprimanded the mob, the mob declared the situation “out of control” and closed the thread within minutes.

In reality, it had been out of control for over a week. Several members of the gang were practically vicious. Sylvain Gnemmi, a French oboist playing with the RTÉ National Symphony Orchestra of Ireland, repeatedly used vulgar language to attack me, and posted my personal photos and company info on the thread, even made up stories about my company. Multiple people had asked him to stop, but he refused, claiming that was his freedom of expression; Dimitrios Karaminstzas, Artistic Director at Klassik in Moabit in Germany, posted a few replies that were particularly threatening; Tamber King, an oboist from the US, repeatedly hurled personal insults at me (accusing me of having mental problems) as well as at other people who didn’t share her viewpoints. And then there was bassoonist and repairman Rick Shepard, owner of Atlantic Woodwindrepair, who campaigned for my dismissal.

This mob had no respect for freedom of speech, and more crucially, press freedom. Ms. Needleman, who started what a bystander aptly called “a witch hunt”, made no effort whatsoever on reigning in her supporters, even though she was monitoring the threads closely. It appeared to me an orchestrated move to smear, discredit, intimidate and destroy a critic who didn’t sing her praises unreservedly.

I never expected such a blatant violation of press freedom in the Western world. Artists’ reputation should be built on artistry, not manipulation or intimidation. Perhaps these people thought that if they showed their collective power, no other critics would dare to write anything less-than-stellar about their favourite players.

Andris Nelsons’ stunning walkout from this summer’s Parsifal illustrates a deep-seated crisis at Bayreuth. Andris loves the festival. It gave him his first international break, caused him to be spotted by Birmingham and has generally given him pleasure and professional satisfaction throughout his fast-track career.

He did not quit lightly.

From the little we know of the true cause, he was not too keen on the Parsifal production and he was even less enthusiastic about uncalled-for interventions by the festival’s music director, Christian Thielemann. Whichever of these reasons triggered the walkout, it’s unlikely Andris will be back any time soon.

Nor will Kirill Petrenko.

He announced last year that he was leaving Bayreuth because it used him as a workhorse, will scant regard for his needs and wishes. His girlfriend went on to pull out of the Ring after a clash with Thielemann.

That’s how things are at Bayreuth these days. There is a leader. You do things his way, or you find something else to do with your summer.

Nelsons and Petrenko will not go short of offers. Other maestros will steer clear.

‘With the utmost respect’, Andris Nelsons has asked to be released from his contract to conduct Parisfal at this summer’s Bayreuth festival.

The official reason: ‘Owing to a differing approach in various matters, the atmosphere at this year’s Bayreuth Festival did not develop in a mutually comfortable way for all parties. With regret, the Bayreuth Festival agree (sic) to Andris Nelsons’ request.’

There’s more to it. More follows.

We’ve been hearing of tensions for the past two days at Bayreuth’s Parsifal, directed by Uwe Eric Laufenberg with a decidedly Islamist theme.

The conductor Andris Nelsons threatened to walk out on Monday.

One apparent cause for his departure is interference by Bayreuth’s music director, Christian Thielemann.

The music director of the Los Angeles Philharmonic Orchestra is among the latest batch of screen celebrities to be awarded a place on Hollywood’s Walk of Fame.

Gustavo Dudamel will be jostling for limelight with the likes of Goldie Hawn, Hugh Laurie, Tyra Banks and Amy Adams. 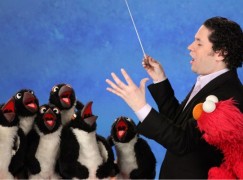 Louisville’s music director Teddy Abrams, also 28, is a man in a hurry. He’s building a career platform in Louisville and other orchestras, less thrustful, are getting wary.

Lefkowitz has serious pedigree. He’s the son of Boston Symphony violinist Ronan Lefkowitz, and grandson of the musicologist Murray Lefkowitz. He, too, is going places – as a soloist, conductor and games composer. 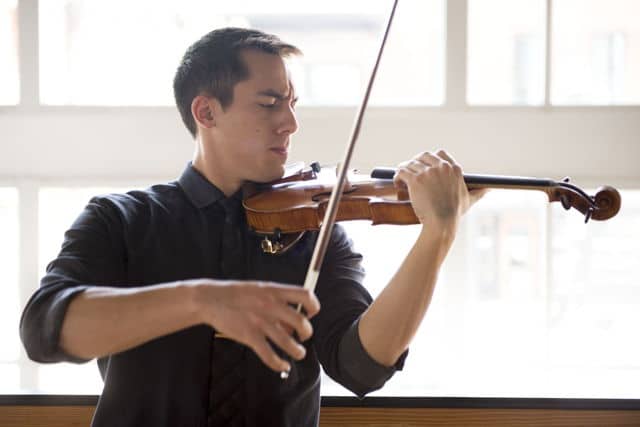 Russian media are reporting the sudden, public death of Alexander Morozov, principal trombone of the Bolshoi orchestra and a professor at the Gnessin school.

He fell ill while waiting for a bus on Academician Anokhin Street and was dead by the time an ambulance arrived.

Alexander Morozov, who was 64, was due to play with his brass ensemble that day at a university ceremony. A graduate of the Leningrad Conservatory, he played in jazz groups before joining the Bolshoi. 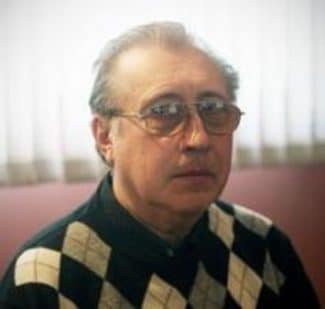