The actor who studied with Schoenberg

He attended the University of California, Los Angeles, with the intention of becoming a composer, studying at one point under Arnold Schoenberg. But, he said, he came to the conclusion that he could not “work fast enough to make a living” in music, and his interest turned to acting. 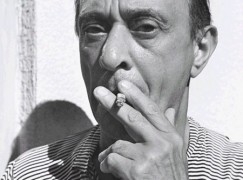