The Tehran Symphony Orchestra’s contract talks with its employer, the Roudaki Foundation, have now collapsed altogether and its music director Ali Alexander Rahbari is leaving the country.

Rahbari had hoped to transfer the management of the orchestra to the Ministry of Culture, but that scheme has failed. Players have not been paid for up to eight months.

Plans to perform at the Shanghai Music Festival have been cancelled. The Iranian government lack the political will to maintain the orchestra, despite its prestige value. 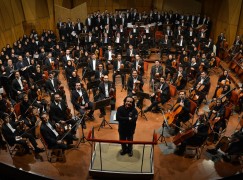