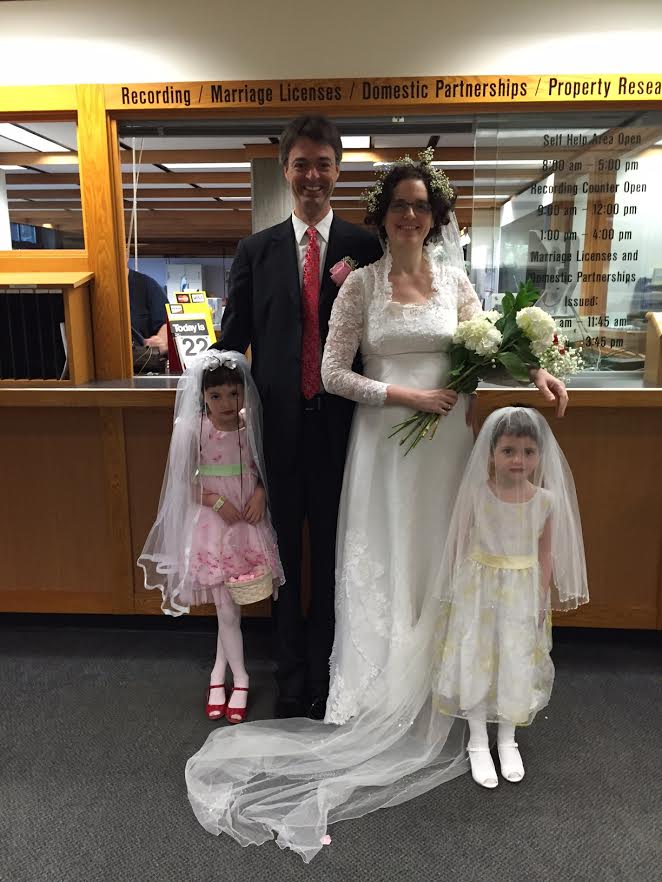 Played my Berlin debut through a terrible flu. Oh, and I got married.

Anthea Kreston, the American violinist in the Artemis Quartet, has reached her 20th concert with the ensemble – a home town debut, with a raging flu. And a wedding to organise in two days.

All in this week’s instalment of Anthea’s must-read diary.

Last night was our Berlin debut. The Artemis has its own series at the Philharmonie, which is one of the most incredible halls I have played in. That was concert #20 for me/us, and it felt terrific. The hall is a 360 degree hall, with layered irregular large balconies fanning out from the sunken stage like petals from a flower. The sound is crystal clear, direct, and generous. I tend to be one of the earlier quartet players at rehearsals and before concerts – since I am still gaining my sea legs, it gives me a chance to play by myself in the hall and get used to the sound, and wiggle out any nerves which may surface. Some of the scarier moments, like the beginning of the second movement of Op. 59 #1, with its pp beginning, rhythmic precision, and many unavoidable string crossings, are good to play many times to make sure that musicality, and not details, are paramount.

We had several days off, and then Gregor and I both got a terrible flu. We were supposed to rehearse the newly composed piece by Demetz, the Italian composer who was selected from hundreds of submissions to the Artemis Quartet Composition Competition. We have all been working on our parts in anticipation of this week, because Demetz flew in to attend our rehearsals. The first day scheduled I was completely knocked out with fever, and the second day Gregor was out. Ecki, Vinny and I met anyway with Demetz to work through the piece and get insight into characters and ask questions.

Luckily the first performance is still a month away. The piece, “Broken Islands”, is incredible – five larger movements and three miniature movements in a row – inspired by his kayak trip through islands by Vancouver Island. Tone rows and pentatonic layering are hidden if you look closely, and he has a very interesting technique of mixing textures in short notes – for example – one person plays ponticello (on the bridge) while another plucks behind the bridge – creating a new sound world.

The day of the concert we met in the morning to rework some sections, and to do some metronome training. Although Gregor and I still were fighting fevers, it was great to be back playing and rehearsing.  During our dress rehearsal, I was concerned about Gregor – he was glazed and flushed – but he insisted on being present. My nose was absolutely plugged, and I forgot my nose spray – so I was playing with my mouth open to breath. Not attractive. Gregor was able to find some nose spray for me, and I took some Advil and a cold tablet.

When you play a concert, somehow any sickness suspends, and you are able to completely concentrate and make it through. I remember one instance when I had a terrible stomach flu, and was sick immediately before, during intermission, and again at the end of the concert. This was the case today, except my nose started to run like crazy during the Beethoven. I made huge sniffs every time there was a loud part, and inelegant wipes to the back of my hand at every rest.  Then, when all was almost lost, Gregor’s G string broke in the last movement. It was a miracle – I was moments away from a waterfall which I could not hold back. I left stage with him and blew my nose while he changed his string. We began the last movement again and had a lovely encore of Mozart.

This week, we returned from our amazing days in Oregon, where we were met by 40 old friends at our favorite bakery, and got married. Jason and I have been together for 19 years, and have official status as Domestic Partners, but never felt the need to be married. Our kids were in our wills and life insurance policies, and in Oregon, Domestic Partnership holds the same benefits as a married couple. But it became clear that this is not the case in Germany.

Our status here was that I was a single mother of 2, and Jason was just a single guy. This means that health insurance and work visas are extremely complex, and since Jason doesn’t have any work here, the ability to get a work visa is basically impossible.  Not good. Not good at all. We had two days to do this – on Thursday we went to get the license and the $10 24-hour rush license, instead of the mandatory 3 day wait. They were able to get us in the next morning to be married by the official in the office. We all headed to the Goodwill store, where the girls and Jason and grandma helped me choose between the 10 available dresses – ranging from 1950’s to contemporary. There was even one that looked exactly like Princess Diana’s – satin, huge bows, shorter in front, and a 10 foot train. We chose one from the 70’s – high lace collar, and a pretty and simple layered skirt. The girls each chose a dress, and we bought three vails and three pairs of shoes for the girls and I.

We were trying to look exactly like the wedding sticker book that our daughters like, and I must say we got pretty close. That was $123.  The license was $70, flowers from the grocery store $29 and cake from the bakery (we just walked there after the courthouse) was $22.  $244, 20 hours of prep, and one of the best weddings I have ever attended. The officiant was lovely, the girls dropped petals, and grandma and grandpa were there, and we each got to pick our cake. Just perfect.

We still don’t have a working sink, and no chairs yet, but we found out that our daughter made it into the JFK international school last night.  So exciting. Tomorrow we will go buy some chairs. The adventure continues!

Just in: Helsinki U. shuts down Musicology Dept. »