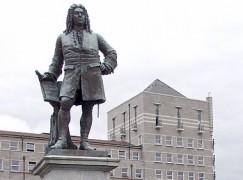 Fascinating article by the Telegraph’s deputy finance editor on how Georg Frideric Handel played the London markets during the boom years of the South Sea Bubble and after.

Handel’s investing career took a perhaps familiar course: after an initial, highly risky foray into the stock market, he decided to stick to safer assets that paid a steady income. In fact the shares he chose to buy in the early days were in the notorious South Sea Company, which ruined many investors, including Sir Isaac Newton.

The German-born composer, however, was luckier and appears to have liquidated his holding in the enterprise by 1719 – just a year before the share price suffered its notorious, spectacular collapse.

What music college chiefs are being paid »