How the Met ate its own audience

In my monthly essay in Standpoint, I bring some new information on the depths of the Metropolitan Opera’s decline, and some analysis of the causes.

Almost anywhere in America and most countries around the world you can now watch live opera from the Met in a local multiplex for the price of a family pizza. The Met, globally branded by (Peter) Gelb, has never been so popular.

The downside is that it has consumed its own audience. Many of the couples going to watch opera in movie houses — especially in the New York commuter belt — are former Met-goers who have got used to watching opera in closeup, popcorn in hand, sitting in Long Island, surrounded by friends and neighbours in jeans and loafers.

There is no easy way to get them to dress up and come back. The sensible course would be for Gelb to cancel Live from the Met in New York area cinemas but he cannot do so without facing financial claims from distributors and complaints from opera houses across America that he has eaten up their audience as well his own. Gelb’s medicine has worked. The patient is now on life-support.

What’s to be done? Read the full essay here. 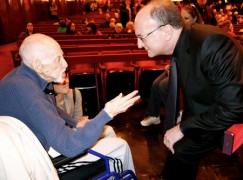