Glyndebourne to stage a Broadway musical

A revealing first interview with Glyndebourne’s new general director Sebastian Schwarz draws the interesting admission that he is planning ‘an eyebrow-raising foray into American musical theatre.’

Schwarz, having let the big cat out of the bag, tells Rupert Christiansen: ‘Nothing can be announced until we have cleared things with the composer’s estate and signed up the creative team.’

The timing, however, seems a tad askew.

This morning, Glyndebourne releases its 2017 plans via the Telegraph and in a press release (below). The ack of new shows is overshadowed, unfortunately, by the exciting prospect of future Guys and Dolls. 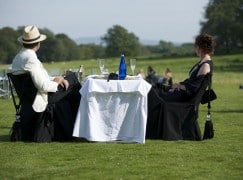 The UK’s first production of Hipermestra, a rarely seen opera by the influential baroque composer Francesco Cavalli, will open the 2017 Glyndebourne Festival.

Glyndebourne is preparing a new edition of the work in close collaboration with conductor William Christie, a pioneer in the rediscovery of baroque music who will conduct the Orchestra of the Age of Enlightenment. The opera will be directed by Graham Vick; his first new staging for Glyndebourne in 17 years.

Hungarian soprano Emöke Baráth makes her UK debut in the title role with Italian countertenor Raffaele Pe making a Glyndebourne debut as Linceo. Portuguese soprano Ana Quintans, who performed the role of Cupid in Hippolyte et Aricie at the 2013 Glyndebourne Festival, is cast in the role of Elisa, and British tenor Benjamin Hulett, who played Jonathan in the 2015 Glyndebourne Tour production of Saul, will perform the role of Arbante.

Hipermestra, based on the tale of Hypermnestra from Greek mythology, premiered in 1658 but after 1680 was not staged again until its modern premiere at the Early Music Festival in Utrecht in 2006. Glyndebourne’s production will be the first since then and marks the latest chapter in the company’s distinguished history with the operas of Cavalli – the company’s stagings of L’Ormindo (1967) and La Calisto (1970) in arrangements by Raymond Leppard were major influences in the revival of interest in the composer.

Conductor William Christie said: “It was almost 50 years ago that Glyndebourne first introduced Francesco Cavalli, a completely forgotten composer, with two of his works, L’Ormindo and La Calisto. The effect on the opera world was nothing short of extraordinary. Conducted by Leppard with outstanding singers including Janet Baker, Ileana Cotrubus and Richard Van Allen, these works established Cavalli as a great composer of opera and reaffirmed Glyndebourne’s role as a place of discovery. After so many years I’m happy to take up this extraordinary beginning and continue the ‘Cavalli tradition’ at Glyndebourne with a new production of Hipermestra, one of his best works. Times have changed and I am proud to be part of a new Cavalli wave, more in keeping with the historical performance school that is doing so much to continue the evolution of early music. I hope that our Hipermestra will have as much to say to today’s audience as its predecessors had to say so many years ago.”

Another highlight of the 2017 Festival will be the world premiere of a new opera based on Shakespeare’s Hamlet. Commissioned to coincide with the 400th anniversary of the death of William Shakespeare in 2016, Hamlet is the work of Australian composer Brett Dean and Canadian librettist Matthew Jocelyn. It will be the sixth world premiere presented at the Glyndebourne Festival in its 82 year history and is part of the Shakespeare400 campaign, coordinated by King’s College London.

Hamlet composer Brett Dean, said: ‘‘The operatic potential of Hamlet is huge: the themes of life and death, love and betrayal have opera written all over them.  Even the fact that Hamlet is a thinker, a man given to self-awareness and self-appraisal, lends itself well to opera.  The play provides frozen moments for him to express feelings; built-in ‘aria moments’.  There’s a lot of humour in the piece too, as always in Shakespeare, and the wonderful way in which Matthew is shaping the text has been deeply inspiring.’

Hamlet will be directed by the Australian director Neil Armfield, who staged Dean’s acclaimed first opera Bliss in 2010. Conductor Vladimir Jurowski returns to Glyndebourne for the first time since completing his tenure as Music Director to conduct the London Philharmonic Orchestra.

A cast of some of the finest singing actors of the moment will perform in the premiere, including British tenor Allan Clayton as Hamlet, British mezzo-soprano Sarah Connolly in the role of Gertrude and the legendary British bass John Tomlinson as Ghost of Old Hamlet. The Canadian soprano Barbara Hannigan, a strong advocate of contemporary music, will make her Glyndebourne debut as Ophelia.

The third and final new production of the season is Mozart’s La clemenza di Tito and will mark the Glyndebourne debut of the prominent German director Claus Guth, a frequent guest at top European houses including Bayreuth, Salzburg Festival, Theater an der Wien and La Scala.

Glyndebourne’s Music Director Robin Ticciati will conduct the Orchestra of the Age of Enlightenment for only the second ever staging of the opera at Glyndebourne.  The distinguished Australian lyric tenor Steve Davislim makes his Glyndebourne debut in the title role alongside British lyric mezzo-soprano Alice Coote (Vitellia), American mezzo-soprano Kate Lindsey (Sesto) and American soprano Joélle Harvey (Servilia).

Among the productions being revived for the 2017 Glyndebourne Festival is Tom Cairns’s 2014 staging of Verdi’s La traviata, which will receive two performance runs next summer. Canadian soprano Joyce El-Khoury shares the role of Violetta with Russian soprano Kristina Mkhitaryan, both making Glyndebourne debuts, while Alfredo is performed by Brazilian tenor Atalla Ayan and American tenor Zach Borichevsky. The powerful Greek baritone Dimitri Platanias makes his Glyndebourne debut as Giorgio Germont, a role he shares with Russian baritone Igor Golovatenko who made a notable debut as Severo in the 2015 Glyndebourne Festival production of Poliuto.