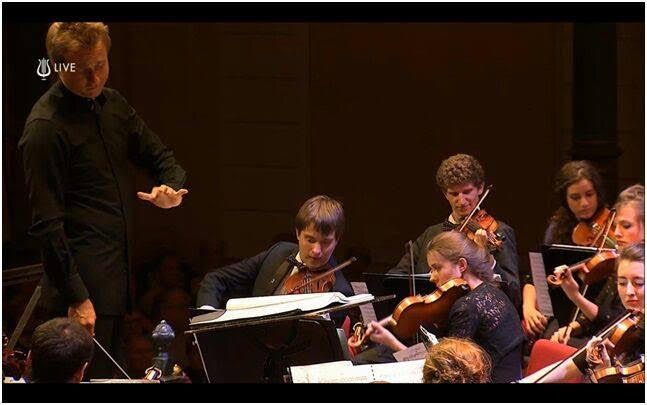 Emily Davis, concertmaster of the European Union Youth Orchestra which faces closure after the EU ended its funding, has asked Slipped Disc to publish a personal letter to the commissioner who is killing the orchestra.

In reaction to the news of EUYO’s forced closure due to lack of funding, I am writing to you with my concerns.

I wanted to tell you about one of the most exhilarating and defining moments of my life as a musician. It was when I began my EUYO journey on the orchestra’s 2013 Summer Tour, and I performed for the first time at the historically eminent Berlin Konzerthaus. The programme was to begin with an unconducted rendition of Ravel’s Bolero, the clock work stability held together by our superb snare-drum player. He sat centrally, glueing us together as we built up the mechanical intensity; It was therefore a haunting moment when suddenly the support fell out from beneath, and we saw him faint off his chair. He was taken off stage, and after some time we continued with the concert, fuelled by a protective concern for each other. Word came through that he had recovered and despite nursing a slight arm injury, was determined to pick up where he had left off.

We finished the concert starting mid Bolero, feeling emotionally charged and determined. Inspired by our friend we threw our entire beings into playing; at one point we stood up together and discarded our chairs. We laughed and moved around the stage, thrilled by the freedom we felt. Ravel’s music soared off the page in a way I hadn’t known before, and I looked around and felt deeply moved by the bond between my peers. The audience were exhilarated and the electricity in the air was palpable. This moment went right to my core as I realised that music really could transcend all other being, and uplift you to a point where there are no further words to describe the feeling. This was the first time I remember experiencing such a powerful concert, but now on the verge of my sixth EUYO tour, I can say there have been many more since.

The EUYO isn’t an orchestra that can be simply defined as a project. It is an ongoing, living and breathing being that is run with hard working passion to be a musical institution for our continent. The more conversations I have with other top level musicians who are now based around the world, I realise that the EUYO is a fundamental reason why many wanted to dedicate their life to music – touched by the infectious “EUYO spirit”. Growing up as a young violinist, I looked to the orchestra with great aspirations; The concept of travelling with such a calibre of musicians and representing my country was exciting and fascinating. With the taste of troubling times in the air for the world of music, it disturbs me to think that even this important first step will now cease to exist.

The lessons I have learnt with the orchestra don’t end with world class musical training. From my Spanish friends I have learnt to rejoice in song. From the Dutch, their “say it like it is” honesty. From the the Romanians, I am inspired by their bursts of spontaneous folk music and lack of inhibitions. This unique combination of cultural personality and extreme talent has now been moving audiences worldwide for 40 years, in a tradition we are all so proud of. There is always a strong reaction from our audiences, when at the close of every performance we demonstrate our love and respect for each other with hug, symbolising the unity between us all. The orchestra strives to reach out to audiences and communities across the globe, and share this youthful spirit and musical language that we are lucky enough to have. Such a multi cultural hub of talent and energy surely delivers the strongest message from the EU that could possibly be said, resounding in the EU motto, “United in Diversity”.

I urge you to reconsider the funding actions from the last two years, as we cannot afford to disregard the future generations of European musicians. Such a group cannot be confined within the brackets of a “project”. It is unacceptable that bureaucracy should interfere with something honest and true – as we witness increasing divisions and xenophobia rising in nations world wide, make use of our voice and our message. Champion us and celebrate us. Don’t silence us.

Read more information here on what you can do to help:
http://www.euyo.eu/about/saveeuyo/