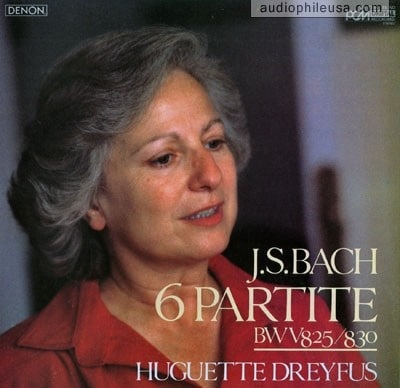 Death of a beloved international harpsichordist

The French harpsichord player Huguette Dreyfus died on May 16 at the age of 87.

Huguette Dreyfus, the great French harpsichordist and teacher, left us in the late hours of May 16. I came to France to study with Huguette, and she was my harpsichord teacher from 1990-1994. In the decades to follow, she was my beloved friend. As a harpsichordist, Huguette was a trailblazer in many ways. Although firmly committed to performance on historical instruments, Huguette had learned on so-called revival harpsichords, as a student of Ruggiero Gerlin (her recording of selections from Bartók’s Mikrokosmos, on a Neupert harpsichord, is extraordinary).  Her discography numbers in the hundreds, with a noted affinity for Bach, Couperin, and Rameau. She was a chamber music partner to some of the most noted musicians of her time, including Henryk Szeryng, and flutist Christian Lardé.

Huguette’s greatest quality was her nearly preternatural perceptiveness. As no two musicians are alike, Huguette’s approach focused on leading each student to achieve the maximum of their potential. Although inquisitive and informed on questions of performance practice, she never permitted theory to displace basic mastery of the instrument, stressing phrasing, expressivity, clearly defined polyphony. Less arcane problems were handled with great simplicity – those of us treated to having our hair pulled sharply upwards invariably saw improvement in our postures!

A woman of the greatest warmth, humour, and humanity, I remember well coming to Rueil-Malmaison, a lovely Parisian suburb, for my first formal lesson, in the fall of 1990. Looking for Huguette in the brasserie near the conservatoire, I found her on the floor, in her tailleur Chanel, roughhousing with the German shepherd belonging to the owners of the place. I remember well our Friday classes, where all students were encouraged to stay and listen to their classmates’ lessons. On these days, Huguette would serve coffee and homemade cakes (her flourless chocolate cake, with a touch of espresso, was legendary!).

I remember her great courage, and her infinite commitment to her students. In the early 90’s, she fell near the Lyon train station, breaking her leg severely. Undeterred, she taught from her beautiful home in the 7th arrondissement, on her Blanchet harpsichord. One morning, she didn’t answer the intercom’s ring with her customary speed. One of her former students, visiting from Brazil, soon joined me on the sidewalk in front of the building. When Huguette finally answered, her voice betrayed her exhaustion and pain. “My dears, I can’t teach you today. I haven’t slept at all. But please come upstairs.” We did our best to help Huguette get comfortable, and my fellow student put on some coffee. After taking a few sips of coffee, Huguette was very suddenly her old self: “Oh!!! I feel MUCH better! Let’s get started!”

Long after my student days ended, my visits with Huguette remained one of the highlights of my life. I was honoured to be able to invite her to any musical event, great or small, in which I participated. My sense of pride and love seeing her in the audience was overwhelming.

Although her physical state became fragile in her final years, and the loss of her cousin Nicole (her only remaining close relation) affected her deeply, Huguette remained bright, and was knowledgable and engaged about current events, as well as following the happenings of her students throughout the world. Huguette surprised us all, making an astonishing recovery following a fall at home, necessitating more than six months of hospitalisation.

Unfortunately, Huguette’s indomitable spirit did not allow her to recover from her most recent accident, and she found herself once again hospitalised and helpless. Coming from Chicago in late February to visit her, I saw that she was never alone, and was loved even by nurses and doctors. How could it be otherwise? I told her that I loved her, and sent loving thoughts from my partner (also a devoted student). Although aware that I might be saying my final farewell at that moment, and relieved today that she is released from her suffering, the reality of Huguette’s absence is difficult to accept. Still, after the tears, every time I sit at the harpsichord, I will think of her with love, gratitude, and maybe a smile. I will be joined by hundreds of harpsichordists all over the globe.