After 34 years in the #2 seat, Yoko Moore has called time on the orchestra.

Appointed by Lorin Maazel, she was ordered to upgrade her instrument to Cleveland standard.

She supported just two concertmasters over a third of a century, Daniel Majeske and William Preucil.

Now, says Yoko, ‘I can’t do too much anymore. Physically, it’s enough for me.’

Cleveland’s front row won’t be the same without her. 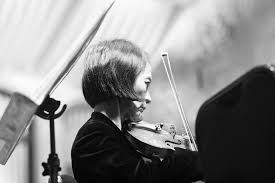