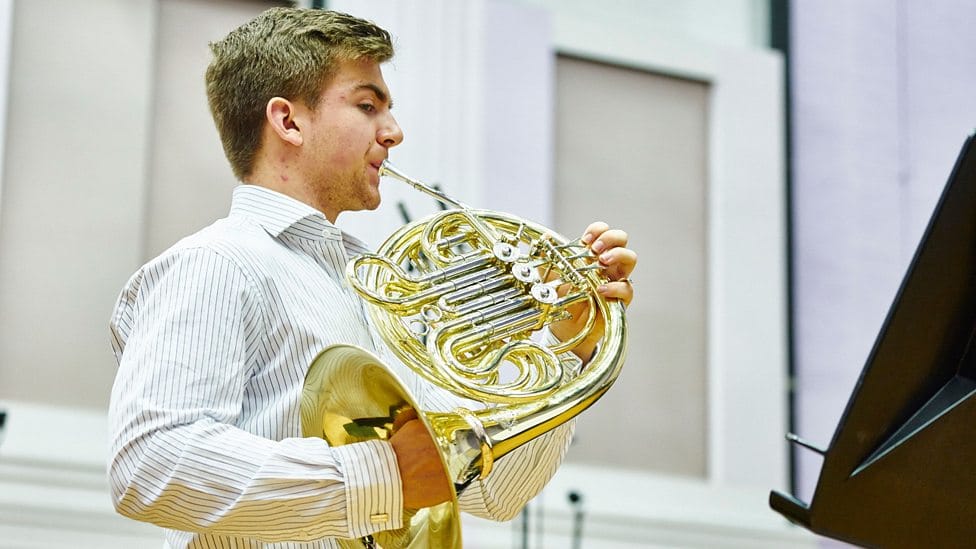 Not the cellist, Sheku Kanneh-Mason, who won this year’s competition, but one of the other finalists, horn player Ben Goldscheider.

Ben Goldscheider was due to study at the Berlin Hochschule next year, but his plans have just changed quite dramatically…

He has been approached by the Barenboim-Said Akademie (also in Berlin), a phenomenal new institution set up by Daniel Barenboim and the literary theorist and intellectual Edward Said. Their aim is to bring together the most gifted young musicians from the Middle East and Europe, and combine the study of music with the humanities. This part of the curriculum is designed to foster intellectual curiosity, critical reflection, and persuasive written and oral expression based on the study of philosophy, history and literature.

Ben’s name was put forward by Radek Baborak, and he was chosen to be Baborak’s one student from applicants all over the world (Europe, Asia, North America, South and America and North Africa and the Middle East).

He has been awarded a full tuition scholarship, weekly horn lessons with Baborak, piano lessons, conducting lessons, tutorship from Barenboim himself and playing opportunities with the West-Eastern Divan Orchestra and Berlin State Opera.

He will be one of the first 30 hand-picked students to start the Akademie which will formally open in October!

Ben says, “I feel hugely privileged to be selected for this incredible academy. As an extension of Daniel Barenboim’s West-Eastern Divan project, I am unbelievably proud and excited to be in an institution that realises music goes beyond the four walls of a practice room. Along with the inevitable focus on solo performance, I will gain an extraordinarily wide ranging education, not only of music but also the history and philosophy of the periods studied. This rounded education is put into practice with projects that involve taking music to communities that have been shattered by the horrors of our modern world. There are no words to describe my excitement of approaching music from a new, wider perspective, to see how it can quite literally be people’s salvation in times of hardship and to learn and live with people that have a completely different outlook on life. I really think it is going to be a once in a lifetime opportunity and intrinsically rewarding.”

« Composer killed by Nazis is reburied in Paris