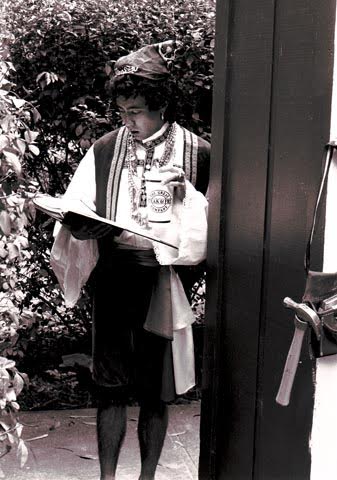 The opera world remains stunned by the death this week, aged 49, of one of its brightest countertenors, the delightful Operalia winner Brian Asawa.

Friends have set up a fund in his memory to support rising talent.

Photo by Lisa Kohler; Brian Asawa, Merola Opera Program 1991 participant, preparing for his role in the opera The Bartered Bride at Stern Grove.

(San Francisco)  To honor the legacy of Brian Asawa, 1991 Merola Opera Program participant, who passed away on Monday, April 18, 2016, a fund has been established in his memory to support future opera artists.  You may donate by visiting the Merola Opera Program webpage here and clicking the “Donate” button or by calling the Merola development office at (415) 936-2311.

The Brian Asawa Memorial Fund will benefit incoming Merola Opera Program participants, with a particular preference given to countertenors.  Mr. Asawa was a much beloved international opera performer, known for his big personality and big heart.

In 1991, he was selected to participate in the prestigious Merola Opera Program, becoming one of the few countertenors admitted. He was lauded for his performance in The Bartered Bride, which was performed at Stern Grove.  Following Merola, Asawa was offered a position with the San Francisco Opera Adler Fellowship program.

He was the first countertenor to win both the Metropolitan Opera National Council Auditions and Plácido Domingo’s Operalia International Opera Competition. His career spanned the globe with performances at the Metropolitan Opera, Opera Australia, Royal Opera House, Paris Opera, Gran Teatre del Liceu in Barcelona, and Hamburg State Opera among others.

Jean Kellogg, Merola Executive Director, says, “Brian Asawa was in the vanguard of the countertenor resurgence which continues to this day. He will be greatly missed in the opera world, and by all of us at Merola in particular.”