How Lutoslawski beat the posterity trap

Most composer reputations subside in the generation after their death. It’s as if posterity calls time out while deciding its final judgement.

Witold Lutoslawski is a notable exception to this hiatus rule. Since his death in 1994, performances of his music have become more frequent and his status has risen steadily among both modernists and conservatives…

Read on here and here. Or here. 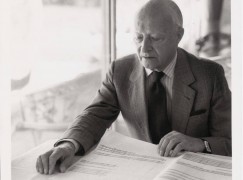