Loud applause for the singers was followed by boos for Katie Mitchell and her production team after the opening of Lucia di Lammermoor at Covent Garden last night.

One spectator told Slipped Disc that the boos were not above and beyond the normal for a challenging production.

The quickest reviews, just in, may indicate a split down gender political lines. 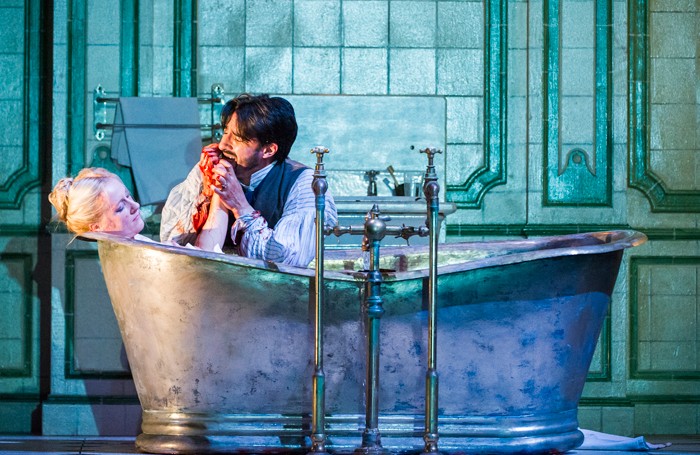 Rupert Christiansen in the Telegraph:

Mitchell makes Lucia a curiously modern figure, more Ruth Ellis than the fey Romantic heroine depicted in the music. Donizetti and his librettist quite carefully and plausibly chart her descent into madness – but Mitchell has chosen to ignore this, inventing a gratuitous plot line in which Lucia is desperately trying to abort Edgardo’s baby, enlisting the help of her maid Alisa and some kinky sex games in disposing of her wretched blameless husband.

Some might find this intriguing; I found it merely perverse – and heavy-handed too.

George Hall in the Stage:

There was a good deal of booing for the production team at their curtain call. Much of this is surely down to Mitchell’s split screen approach, whereby the audience sees not only the characters meant to be singing at any given moment, but what is happening simultaneously offstage. The effect is hugely distracting.

As the wedding guests (presented, curiously, as all male) celebrate Lucia’s nuptials with Arturo to one side of the stage, to the other we witness Lucia and Alisa kill him in what is clearly a premeditated attack. His death throes are so protracted as to generate laughter – no mean feat is this unrelievedly sombre piece.

Though undeniably powerful in places – the last 40 minutes are unforgettable – this is ultimately a version of the opera rather than an interpretation, and the stagecraft can be over-complicated. Vicki Mortimer’s designs split each scene in two, allowing Mitchell both to confront us with parallel narratives throughout, and to bring on stage material that Donizetti leaves off it. But the result is as much distracting as illuminating, above all in the juxtaposition of the murder and the formidable performance of the Wolf’s Crag duet.

But Alexandra Coghlan on theartsdesk:

Lucia di Lammermoor is an opera in which men spend an awful lot of time talking about women, and very little actually talking to them. (Which, if nothing else, ensures a rather more dramatic denouement than a frank conversation about everyone’s hopes and dreams would produce.) Enter director Katie Mitchell and her “strong feminist agenda”, determined to give Donizetti’s women back their voices, and with them the agency every plot twist in the opera conspires to deny. If the result is by no means a classic production, neither is it the all-out assault on tradition and decency the Royal Opera’s recent warnings of sex and violence led us to believe….

Mitchell’s Lucia deserves much more than the knee-jerk booing it got on opening night. Thoughtful, if strident in its agenda, it has plenty to say, and finds an emotional violence and anger that’s as rare as it is authentic