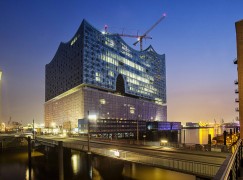 All the big beasts are lined up for the opening year of the Elbphilharmonie – Muti, Chailly, Rattle, Barenboim, Bychkov – but it’s Gustavo Dudamel who wins the honour of conducting the first Beethoven cycle, all nine symphonies in five nights with his Bolivar band.

Today the Elbphilharmonie & Laeiszhalle Hamburg’s upcoming 2016/17 season was presented to the public. In the presence of the city’s First Mayor Olaf Scholz and the Director of NDR (North German Radio) Lutz Marmor, theGeneral and Artistic Director Christoph Lieben-Seutter gave a succinct overview of the programme. The Elbphilharmonie officially opens in January 2017, thus the press conference was held on the third level of the car park. Projected onto the walls of the spiral car ramp were large artworks – examples of the Elbphilharmonie’s current street art project. This project accompanies the launch of the upcoming programme and will remain visible throughout the city leading up to the opening in nine months. A Hamburg-based group of street artists has worked intensely over the past few days, painting, spraying and designing adventurous and catchy artworks that promote selected events from the new season, for example, the »Salam Syria« festival and »Viva Beethoven« – a series that features Gustavo Dudamel and his Orquesta SSB. They perform all of Beethoven’s symphonies on five consecutive evenings.

The grand opening of the Elbphilharmonie is the unrivalled highlight of Hamburg’s 2016/17 concert season. The inaugural concerts performed by the NDR Elbphilharmonie Orchestra and conducted by Thomas Hengelbrock on 11 and 12 January 2017 form the prelude to an intense programme that demonstrates the new concert hall’s musical aptitude over a period of five months. The target audience comprises music lovers and classical music connoisseurs from far and wide, and people who have awakened their curiosity of music through interest in Hamburg’s new architectural landmark. Elbphilharmonie aims to be a »Concert Hall for Everyone«: the publicly accessible Plaza opens on 4 November 2016 already and the Elbphilharmonie’s concert programme appeals to all due to its carefully structured design, quality and accessibility. The season begins on 6 September 2016 with a guest performance by theLucerne Festival Academy in the Laeiszhalle, continues there for four months and from 11 January 2017, runs parallel in both concert halls.

« The flight departing from Gate 9 is bumblebee (via Bartok)