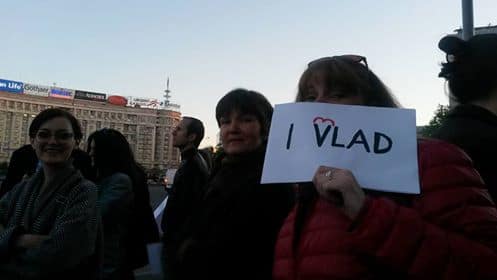 Chaos in Romania as Culture Minister is sacked

The capable and popular Minister of Culture Vlad Alexandrescu, has been sacked by the prime minister over the ongoing battle between xenophobes and foreigners at Bucharest National Opera.

‘The best Minister of Culture Romania has been blessed with in decades,’ according to one close observer, Vlad had been carving throught legacies of favouritism and corruption in the arts and has paid the price for his diligence.

The president of Romania, Klaus Iohanis, said: ‘There are only few imaginable mistakes that were not made yet by the minister of culture in the ONB scandal.’

Vlad’s supporters are out on the streets.

Meanwhile, 450 anti-foreigner members of ONB have issued the following release:

The press campaign which denigrates NOB employees, accusing them of xenophobia is a campaign that distorts the truth.
Following research carried out among employees NOB demonstrated with audio-video evidence and witnesses, the cry considered xenophobic belonged to one person, male. The remaining employees declare that strongly distance ourselves from this unique person.
Media scandal created around the couple-Johan Kobborg Alina Cojocaru is a diversion intended to mislead public opinion and distract attention from the serious problems existing in Opera: abuses, discrimination, illegal activity, fraud.
NOB employees are attacked in the press precisely because they want to bring to light the truth and return the institution to legality and morality.
Please note that no operating system NOB brought our institution in this impossible situation, but disastrous management team’s Răzvan-Ioan Dincă, currently under criminal trial.
We ask insistently DNA (national anti-coruption agency – p.n.) to investigate urgently the economic and financial situation of the Bucharest National Opera.
We also believe that the statements of Mr. Ioan Holender is a defamation of employees NOB and an attempt to destabilize the national culture. We call on all operas and philharmonic orchestras of Romania to join our campaign to preserve tradition and national value and eradicate abuse and fraud in the current cultural system.
Specify in this way, we grieve the resignation of Mr Vlad Alexandrescu from the Minister of Culture. We believe that His Excellency has done a tremendously important and correct move when he called the Masters Vlad Conta and Tiberiu Soare to lead NOB. Moreover, under the leadership of this team of professionals, we are convinced that the Bucharest National Opera would have benefited from a functioning modern, European, which we have never opposed.
We oppose only the illegality, fraud and abuse!