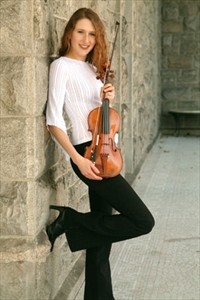 Violinist Bracha Malkin has performed worldwide in recital and with such ensembles as the Tokyo Metropolitan Symphony Orchestra, St. Petersburg State Academic Symphony, Ural Philharmonic Orchestra, Simón Bolívar Orchestra, Bogota Philharmonic, Orquestra Sinfonica of Teatro Municipal de Sao Paulo, Israel Chamber Orchestra, Jerusalem Symphony Orchestra, the Rishon Lizion Symphony Orchestra, Bologna Symphony, Nederlands Promenade Orchestra, and the Jacksonville Symphony Orchestra. She has also performed as a regular substitute violinist with the New York Philharmonic. An avid chamber musician, she has collaborated with Yuri Bashmet, Irena Grafenauer, Gary Hoffman, and Lynn Harrell at Kronberg Academy’s Chamber Music Connects the World 2008 (Germany). She spent two summers at the Marlboro Music Festival and has performed at the Menton Music Festival (France) and the Delft and Storioni festivals in the Netherlands, and appears regularly at the Academy of Music Summer Festival in Nyack, New York. Ms. Malkin is a member of the “Malkin Duo” with her sister, Anat Almani. She is a prizewinner of the Wieniawski and Paganini International violin competitions. Ms. Malkin studied with her father, Isaac Malkin, at the Manhattan School of Music Precollege as well as Aaron Rosand at the Curtis Institute of Music, Miriam Fried at Indiana University, and Boris Belkin at the Maastricht Conservatory in The Netherlands.

Rebekah Edewards was born in the Upper Peninsula of Michigan and began studying violin at age seven. While attending the Meadowmount School of Music, she started playing viola, switching over completely in her junior year at the Cleveland Institute of Music (CIM). Ms. Edewards studied viola with Mark Jackobs and violin with Linda Cerone, receiving her bachelor of music degree in viola performance, with a violin performance minor, in 2008. Her senior year at CIM, she was awarded the annual Horace & Marie Arnold Viola award. Before joining the BSO, she held positions with the Baltimore Symphony Orchestra and Minnesota Orchestra and was principal of the Charlotte Symphony, Akron Symphony, and Erie Philharmonic. During her tenure in Charlotte, she was a featured soloist performing the Walton Viola Concerto under the baton of Christopher Warren-Green. In addition to Meadowmount, she has spent her summers at the Blossom Music Festival, the Verbier Festival, and the Cabrillo Festival in California.

A native of Chicago, Leah Ferguson recently earned her bachelor’s degree from the Cleveland Institute of Music under the guidance of Robert Vernon. She is currently pursuing a graduate diploma at The Juilliard School as a recipient of the Kovner fellowship, studying with Heidi Castleman and Cynthia Phelps. Previously she studied with Mark Jackobs and Roland Vamos. Recent engagements as a soloist and chamber musician include performances at Severance Hall, the Isabella Stewart Gardner Museum in Boston, and New York’s MoMA and Kaufman Center. As a chamber musician Ms. Ferguson has participated in festivals including Music@Menlo, Ravinia’s Steans Music Institute, and the Perlman Music Program and performed as a guest artist with the Academy of St Martin in the Fields Chamber Ensemble. She has performed with ensembles including the Chicago Symphony Orchestra, the Cleveland Orchestra, and the New York Philharmonic, as Assistant Principal of the Rochester Philharmonic, and as guest Associate Principal of the Montreal Symphony Orchestra. Her performances have been featured on WQXR’s The Greene Space, WCLV Cleveland, WFMT Chicago, and HBO television show “Masterclass.” Leah Ferguson plays a viola made in 2007 by Stefan-Peter Greiner.

Violist Danny Kim, a native of Saint Paul, MN, earned his master of music degree in viola performance from The Juilliard School under the tutelage of Samuel Rhodes. He began his musical studies at a young age on the violin with his mother, Ellen Kim, and then transitioned to the viola in high school under Sabina Thatcher. Mr. Kim completed his undergraduate degree at the University of Wisconsin–Madison where he studied with Sally Chisholm, and received a BA in viola performance and a certificate in East Asian Studies. He was a Fellow of the Tanglewood Music Center, where he won the Maurice Schwartz Prize, and has participated in such festivals as Marlboro, Pacific Music Festival, and Aspen, and as a teacher was in residence with El Sistema in Caracas and Northern Lights Chamber Music Institute in Ely, MN. He has performed with distinguished ensembles and artists including the Metropolis Ensemble in collaboration with Questlove and The Roots, New York Classical Players, Camerata Virtuosi New Jersey, and Symphony in C and appeared on Sesame Street with conductor Alan Gilbert. As a chamber musician, Mr. Kim has performed with the Chamber Music Society of Minnesota, members of the Saint Paul Chamber Orchestra, Pro Arte Quartet, and collaborated with artists including Joseph Silverstein, Peter Wiley, Marcy Rosen, Richard O’Neill, Charles Neidich, Anthony McGill, Nathan Hughes, and others. He toured South Korea in 2014 with his string quartet, Quartet Senza Misura, and violist Richard O’Neill. He also was a tenured member of Madison Symphony Orchestra.

Kathleen Battle gets a call back to the Met »