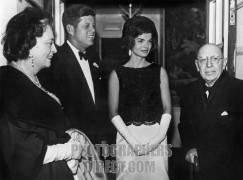 An outbreak of American operas

Over the coming weeks, the following American-themed operas will receive world premieres:

This weekend, Opera Ithaca presents the world premiere production of Billy Blythe, an American folk opera about the childhood of President Bill Clinton.

Minnesota Opera’s The Shining, based on Stephen King thriller, opens on May 7.

Opera Colorado presenting the world premiere of Nathaniel Hawthorne’s The Scarlet Letter, also on May 7.

Some kind of trend?