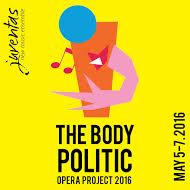 The world’s most politically correct opera

This world premiere could hardly be more 2016.

POSTCARD:
A transgender man from Kabul emigrates to the South at the height of the Afghan War.

After emigrating to the American South, a transgender Afghan immigrant explores his identity while navigating a new cultural landscape.

But as Iphis’ LBGT social circle collides with the traditional American Family, The Body Politic exposes the daily bigotry facing the trans community, and the divisive prejudices of the post-9/11 world.

This world premiere opera challenges our cultural understandings of gender and its shortcomings, wrestling with complex questions of freedom and identity in a year in which transgender issues have come to the forefront of our culture, while violence against the trans community remains staggeringly high.

This black-box production places the audience in the middle of the action, following Iphis’ journey from childhood in Afghanistan to citizenship in the United States. Scored for a seven instrument ensemble, this opera uses new music to challenge old prejudices and to shine light on the marginalization faced by these communities. The production will take place in Boston Center for the Arts Plaza Theater, May 5-7 2016.

It’s what opera is all about, eh?

« ‘He gave every orchestral player an F’