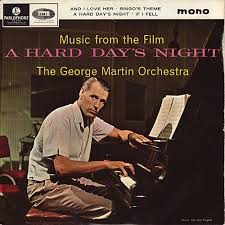 Sir George Martin, who has passed away at 90, was either sharper than all his rivals or a very lucky man. He signed the Beatles for Parlophone, the smallest of EMI’s labels, after they were rejected by Decca and couldn’t get a hearing elsewhere.

He then tweaked them in studio into a world-changing ensemble.

Much nonsense has been, and still is, spouted about him. The BBC’s arts editor Will Gomperts has just said on the Today programme that he was a conductor to their orchestra, without him they couldn’t play together. Pure tosh.

Martin was a trained oboist and pianist who knew what worked. Once he had speeded up Please Please Me and got the Beatles into the charts, he introduced them to other possibilities. It was Martin who suggested a string quartet for Yesterday and a piccolo trumpet for Penny Lane.

London orchestra players were often hanging loose at Abbey Road and happy to help out. Here’s a list of the classical players Martin hired.

As a person – he lived locally, I interviewed him twice – he was quiet, modest, discreet, a family man. He wore a tie. He gave the impression he never took a second drink, let alone tried a drug.

Martin left EMI to become an independent studio producer. But the Beatles had overturned music perceptions and he never broke another mega-band.

His death was announced on Twitter by Ringo Starr. May he rest in peace.

« The composer’s wife died hours after his world premiere

‘A crucial part of the Beatles’ chemistry’ »