Simon Rattle: Max was my hero

The incoming music director of the London Symphony Orchestra has posted a tribute on its website to the composer, Sir Peter Maxwell Davies, who died this week. Sir Simon premiered and recorded Max’s first symphony – his commercial record debut – and is passionately devoted to his tenth and last, which received its premiere from the LSO. He writes, inter alia: 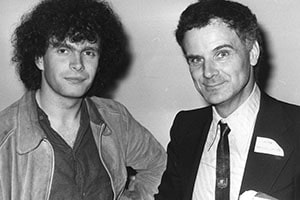 Personally he was a hero for me from childhood onwards; as a young teen my parents used to curse him, as I had read that he loved purple and I was therefore unwilling to wear any other colour. Some of the first music I conducted were his chamber pieces: Seven in Nomine and Antichrist. When the Philharmonia asked me to premiere his first symphony in 1978, I felt as though all my Christmases had arrived at once, and I will never forget the thrill of sitting down in his publisher’s office and reading through the score, feeling the visceral power leaping out of the page. His thank you present was typically thoughtful; ‘Simon’, he said, ‘I think your life will be improved by a taste for good wine. I will send you 24 half bottles, 12 pairs of my favourite wines, and you can see what appeals to you. Don’t forget what you are tasting!’  This desire to share pleasure and knowledge was also maybe the key to his music, so often written for friends, or with specific people in mind.  His political activity too was always designed to remind people that music was for everyone and could never be taken for granted – a view he promulgated with passion and sometimes acid wit. He kept his pixie sparkle to the end, and the unwavering intensity of his eyes will remain forever with all of us who knew and loved him.

The LSO have posted a further tribute here.

Peter Donohoe: Max was so extreme he made young Prokofiev seem mild.