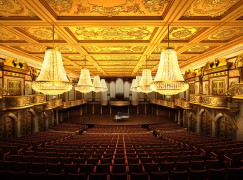 New study: Box-shaped halls give more emotional impact than others

Researchers at Aalto University in Finland have reached the conclusion that traditional concert halls deliver a much greater emotional residue than modern variants, such as the much-vaunted ‘vineyard’ shape.

Professor Lokki tells Slipped Disc: ‘Rectangles render more powerful crescendos (i.e. more dynamics) and also the perceived spaciousness is a function of played dynamics. In a non-rectangular hall you are “looking at the music” and when a crescendo occurs you just here it in front of you. In contrast in great rectangles (Musikverein, Konzerthouse Berlin, Concertgebouw) during the crescendo the sound image widens and finally envelops you. I’ll bet the you have been in Musikverein and perceived this effect. And for us, this is obvious that it evokes more emotions as dynamics is one of the key issue in the interpretation of music.’