You love the country houses, the costumes, the makeup.

But you now the dialogue is recycled from a secondhand lexicon of platitudes.

So here’s the remedy – turn off the TV sound and play music written to accompany Downton Abbey.

It’s Lebrecht Album of the Week. Read on here or here.

The rest of the album, proficiently performed by the BBC Symphony, is filled with a pair of authentic concertos by minor composers – X  sounds like a cheerful chappie who would have been in his element scoring comedy series for the BBC and Y reminds me of a country bus shelter in the rain, a timeless passage of time, not at all unpleasant. Switch off the sound on your television and play this to accompany Downton Abbey. 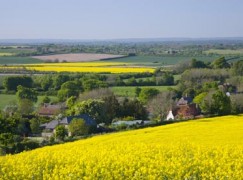