The Deutsche Oper in west Berlin is planning a new Wagner Ring cycle, directed by the Norwegian, Stefan Herheim. It announced the plan last year.

So yesterday the Staatsoper in east Berlin announced a new Ring, directed by the Russian, Dmitri Tcherniakov.

Both are intriguing possibilities but how much Rhine gold can a city spend before it exhausts the public patience?

A culture of excess is replacing the tunnel vision of the Cold War era. 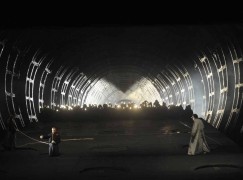