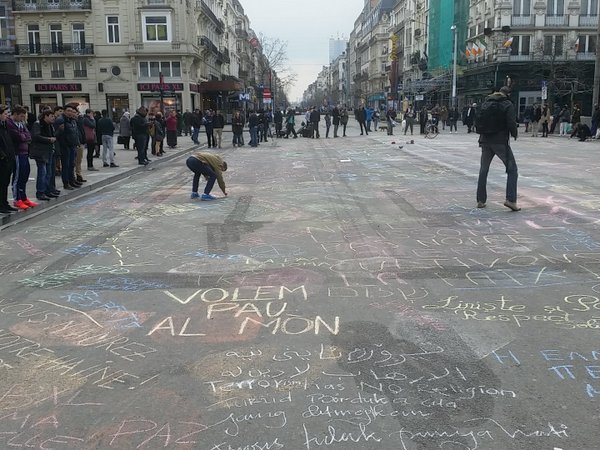 The musicians, singers and staff of Brussels Philharmonic and the Flemish Radio Choir are, just like the whole world, shocked by the dramatic events of last Tuesday in ‘their’ Brussels. Our hearts go out to the many victims, their families, close ones, and everyone who has been affected directly and indirectly.

We sympathize deeply as human beings, but also as a Flemish art institution that has her home in Brussels, but also not in the last place as musicians. We cannot help but make our voice heard. A voice that, as a result of the more than 18 different nationalities in our orchestra and choir – every one of them having made Brussels their home – sounds in many languages. But the one language we all speak, that unites our voices, is music…

“What we can offer in these times of unspeakable sorrow, torn apart lives, growing distrust and distance between people, is that music. Music bonds, helps with healing, with dealing and overcoming, bringing people together. The idea arose spontaneously with the musicians. Minister of Culture Sven Gatz and Mayor Yvan Mayeur were immediately interested. Thus we managed to create this moment at the steps of the Bourse on short notice,” says Gunther Broucke, general manager of Brussels Philharmonic and the Flemish Radio Choir.

On Friday March 25 at 15h the musicians and singers of Brussels Philharmonic and the Flemish Radio Choir will come to the heart of ‘their’ city, the Bourse Square, where so many have gathered already in a spirit of togetherness and healing. The orchestra and choir will bring “Ode to Joy” from Beethoven’s 9th Symphony: not only the European anthem, but also a call for peace, a hymn of hope for the future. We call on everyone to let your voices be heard together with ours.