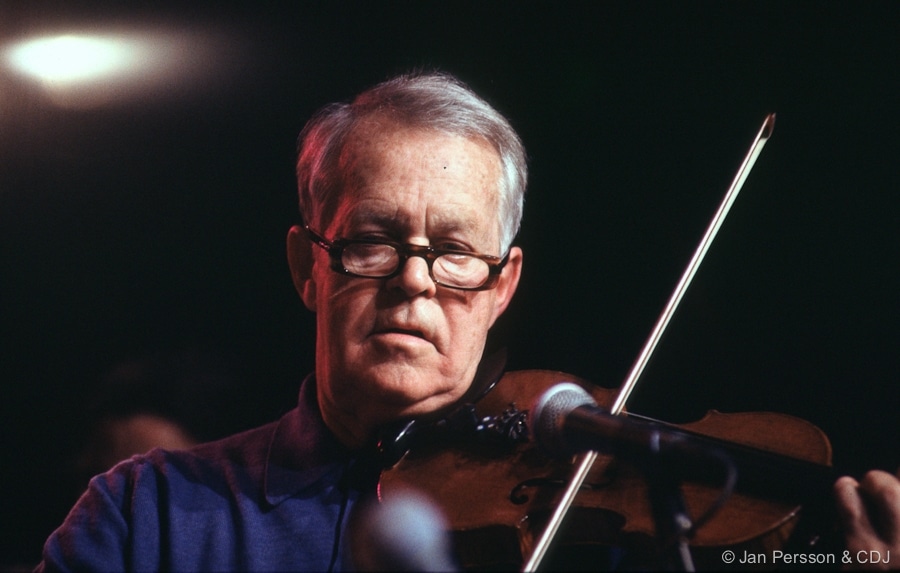 Born in Copenhagen in 1916, Asmussen began playing the violin around the age of seven.

After some lessons with classical music-teachers , he decided that jazz was his main interest… although he names Fritz Kreisler as a main inspiration for sound quality and expressiveness. And in Asmussen’s playing there are certainly Kreisleresque qualities.

Other influences were Louis Armstrong, whom he befriended in Copenhagen in the early 1930’s, the Mills Brothers, Fats Waller, Josephine Baker, Duke Ellington,Eddie Lang and Joe Venutti.

Asmussen began playing professionally at 17, when he made his first recording with his own band.  Over 75 years he toured the world as a bandleader and soloist, playing with big bands, at church concerts and in studio.

During World War Two he was incarcerated by the Nazis and spent time in a prison in Berlin. Asmussen used the time to rehearse choreography for cabaret shows while writing ‘mindful and intriguing arrangements” for his violin concerts.

In 1945 he declared ‘jazz is dead’, rejecting ‘non-danceable’ performance and overly intellectual styles.

He joined the Swe Danes trio with jazz singer Alice Babs and guitarist Ulrich Neumann, making the US charts.   A close friendship arose with composer Hoagy Carmichael and jazz clarinet virtuoso Benny Goodman. In the 1960s he played with such jazz greats as Stephane Grappelli, Stuff Smith whom he called his black brother and Swedish jazz pianist Jan Johansson.

Even at the wildest moments when playing electric violin with wah wah pedals and electronic sound boosters, Asmussen maintained hs hallmark elegance which has always been his hallmark.

About 5 years ago a minor stroke forced his bow-arm to give up playing, but he still enjoys life going to concerts and living together with his wife Ellen Bick Meier. In a recent interview he claimed that he was up and ready to take another 100 years.