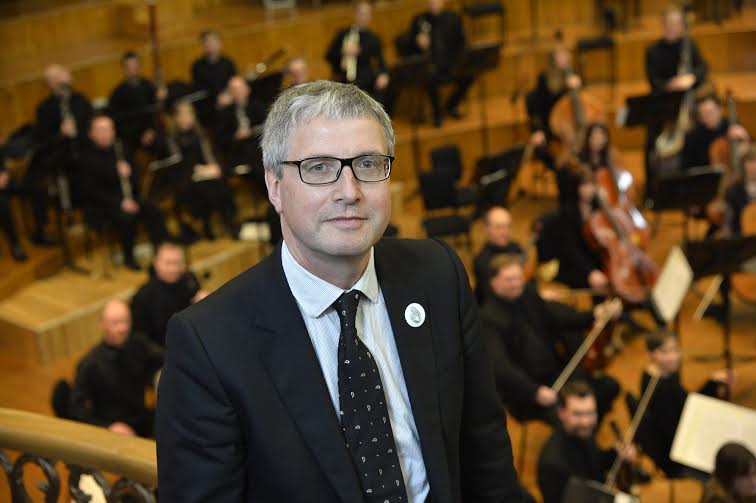 The Ulster Orchestra, on the brink of collapse for the past two years, has named Richard Wigley as its next managing director.

Richard, a New Zealander, spent ten years as head of the BBC Philharmonic in Manchester. He starts work immediately.

He inherits an orchestra saved by Sinn Fein from disaster.

And one whose two chief execs tend to vanish overnight without a word of official explanation.

We wish him every success.

The Ulster Orchestra has announced that its new Managing Director is Richard Wigley. Having worked for the Hallé Orchestra in Manchester, he spent a decade as the General Manager of the BBC Philharmonic before going most recently to act in a consultancy capacity primarily for the Netherlands Symphony Orchestra.

Richard will take up the post in Belfast at the end of February and his first priority will be to lead a new entrepreneurial drive as the Ulster Orchestra plans its 50th Anniversary Year. Warmly welcoming the appointment, Ulster Orchestra Chairman, Sir George Bain said; “We are delighted that Richard is joining us.  He brings with him a wide experience of orchestral management at the highest level, and has worked with many of the world’s leading conductors and soloists.

“An expert artistic planner, skilled at managing change and achieving world-class results under challenging financial conditions, Richard will be invaluable to the Orchestra. The combination of his experience in delivering innovation and interdisciplinary projects, together with developing new audiences and helping artists and managers to achieve excellence, will enable him, in partnership with our internationally-renowned Chief Conductor, Rafael Payare, to lead the Orchestra into a new era of managerial and performance excellence. I would also like to pay tribute to Trevor Green, who has been our Orchestra Consultant since Autumn 2014 and is moving on after making an immeasurable contribution to the restructuring of the organisation. We wish him every success and thank him for his dedication and unwavering support.”

Ulster Orchestra’s Chief Conductor, Rafael Payare commented; “I am very pleased to welcome Richard to his new position at the Ulster Orchestra. His wealth of knowledge and experience will be a huge asset to the Orchestra and I know he is going to love working with this wonderful group of musicians. I look forward to working with him in developing a strong future for the Orchestra.”

Radio France gets another head of music »