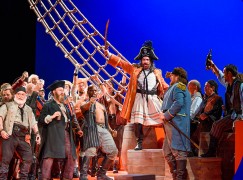 Equity, the actors union which represents many in the ENO chorus, is balloting its members for a strike. The union says they are facing a 25 pay cut and the loss of four jobs.

Equity’s head of live performance Hilary Hadley spoke of plans to abolish extra pay for Sunday working and stop overtime pay. ‘There is also a vague proposal that they’ll be able to find the chorus some additional work during the summer months (May-August). However, the existing proposal is that if they do find work it will cut their pay from 75% to 50% of their current salary.’

The plan is rather more complex and not yet fully disclosed (according to Slipped Disc sources).

A strike may not be the best response at this point, in our view. Best to keep the gunpowder dry until the full plan is rolled out and the impact on the orchestra becomes clear. But feelings are running high across the company.

« ENO seeks artistic director. You have 9 days to apply.

Just in: Air Berlin caves in to Slipped Disc protests »