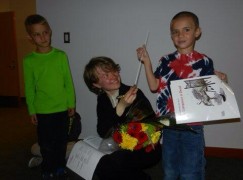 Seven things you need to know about Mirga

1 The new music director of the City of Birmingham Symphony Orchestra was spotted by Kurt Masur at a conducting seminar in 2009.

2 She blew away all competition to win the Salzburg-Nestlé Competition three years later.

3 Gidon Kremer, the most thoughtful of violinists, took her under wing.

4 At the LA Phil, players say she’s the best they’ve seen since Dudamel.

5 She has already been tapped by one US orch with a music director offer.

7 She has a musician boyfriend.