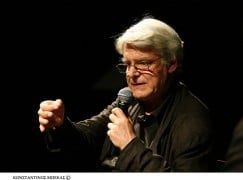 Georges Aperghis, 70, has been awarded the 2016 BBVA Foundation Frontiers of Knowledge Award in the Contemporary Music category for ‘reinventing musical theatre and taking it in entirely new directions’.

The citation states: ‘He has opened up a unique path in the territory of musical theatre employing new scenic devices whereby everything becomes music, starting from the performer’s gestures and including sounds made by scenic elements or objects used as percussion instruments.’

Athens-born, living in Paris since 1962, Aperghis was inspired by Xenakis and musique concrète. In 1976, he co-founded with his wife, the actress Edith Scob the Atelier Théâtre et Musique (ATEM), where musicians acted and actors played. Among 20 works he wrote for ATEM are Jojo (1990), Sextuor (1993) and Commentaires (1996). Last year, Aperghis was honoured with the Lion d’Or at the Venice Biennale. His star is in the ascendant.

« Soundcloud ‘may close’ after heavy losses

Death of a prolific Liszt scholar »