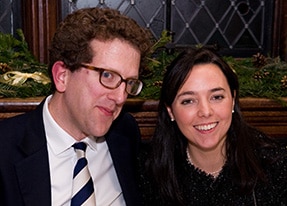 Six months after the shock death of its revered music director, Saint Thomas Church on Fifth Avenue has filled his position as organist and music director.

The new director has, like his predecessor, been recruited from England.

Professor Daniel Hyde is Informator Choristarum, Organist, and Tutorial Fellow in Music at Magdalen College, Oxford and a lecturer in the Faculty of Music. He has conducted the Britten Sinfonia, the Orchestra of the Age of Enlightenment, the Academy of St Martin in the Fields, the City of London Sinfonia, and has made several recordings at Magdalen.

From the press statement: Dan will be moving to New York with his long-term partner, Leticia. Letty has an MA from Trinity College, Cambridge and an MSc from the University of London…  she enjoys singing with the BBC Symphony Chorus.

« Composer dies of heart attack, at 29

And the next music director is…. »