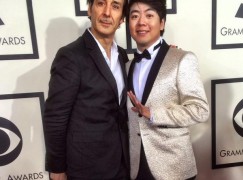 The opportunistic pianist has filmed his own version of the Ennio Morricone score for the Oscar-nominated film.

He does not miss a note, or a trick.

Lang Lang’s performance shot on location on Feb 2 at the Rosewood Hotel Beijing, directed and produced by Harvey Weinstein, co-directed by Tobias Reeuwijk, co-produced by Bey Logan and Sharon Zhang.

A warning of ‘the ubiquity in musicology of microaggressions’ »