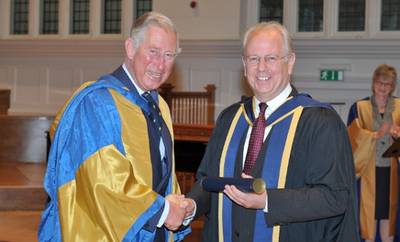 At the Guildhall School of Music and Drama, Professor Barry Ife is calling it quits at 69, it was announced today. He has been in the job for 12 years.

Not, perhaps, the most exhilarating period, according to the list of achievements enumerated in his press release:

·         Leading the application that led to the Guildhall School being awarded Taught Degree-Awarding Powers, which were granted by the Privy Council in April 2014.

·         Reviving and strengthening strategic partnerships with a range of performing arts organisations such as Barbican Centre, LSO and The Royal Opera.

·         Leading the Guildhall School to become the UK’s single largest provider of music education to under 18s by incorporating the Centre for Young Musicians (CYM) and creating new CYM music ‘hubs’ in Norfolk, Somerset and Saffron Walden.

·         Repositioning the School within the higher education sector.

« Sadness as popular US soprano dies of Lou Gehrig’s Disease

Leading contemporary composer ‘is freshly out as a kinky person’ »