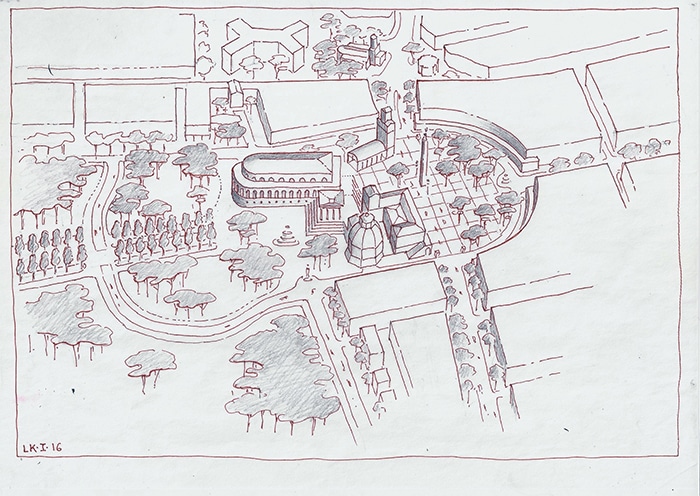 At last, a sensible proposal for London’s next concert hall

Architect Léon Krier has been contemplating the unfolding half-billion pound disaster that will unfold if the London Symphony Orchestra is allowed to build another concrete monster in a part of the city where few care to visit for pleasure.

His solution has simplicity, charm and tradition. Build the hall, says Léon, where Londoners are used to go after dark. And build it with beauty.

Léon writes on the FSI site:

AS AN ERSTWHILE RESIDENT OF LONDON and attendant of innumerable classical concerts, it is not the ravishing beauty of the music but the ghastliness of the Southbank and Barbican concert halls and surroundings which leaves the most enduring, albeit painful, imprint on my mind. What the urbane theater and opera life so successfully achieves in Covent Garden is hopelessly lacking in these desolate music venues. Along with countless music-lovers and performers I have wished that those buildings would disappear forever from the face of London and the music world. The tabula rasa mentality that bestowed on us those loathsome aliens should at long last be turned against its coarse products in an overdue act of redemption.

And yet, judging from the GLITZY BROCHURE “Towards a World-Class Center for Music” – with foreword by the Chancellor of the Exchequer and the Mayor of London – an aesthetically dumb kultural nomenklatura have not finished tormenting the good citizenry with conceptual incubi. How else could the Museum of London site and the Barbican environs be considered, even for an instant, as possible locations to re-found London’s classical music life?

Where, exactly? Read on here.