The row over Pierpaolo Polzonett’s account of teaching musical analysis in prison has spilled over into a nuclear war over the alleged lily-white state of American musicology.

I recall going every year to the AMS for the last 15 years and generally seeing a sea of white faces with very few people of color present and very few papers addressing race or music by people of color.

But I most remember the AMS List posts of January 2011, when people on that list were defending Eggebrecht from the evidence that he was part of a Nazi unit that participated in the mass execution of 14,000 Jews in the Crimea during World War 2. And people on the list, and not just one person, defended Eggebrecht. People on the AMS List were defending a Nazi war criminal. Phrases like, “well can we really prove he pulled the trigger?” and most upsetting, “Well, even if he were a Nazi war criminal, that wouldn’t have an effect on his scholarship…I mean, if he had discovered the identity of the Immortal Beloved would we ignore that because of things he did in his private life?” or “Your private activity has nothing to do with your scholarship.”

People were defending a man they thought was an amazing musicologist who probably murdered 14,000 Jews.

These are people in the AMS. 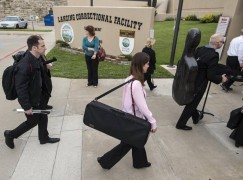