It used to be English National Opera, until the company became over-reliant on Americans imported through the auspices of its sometime artistic consultant, Matthew Epstein.

This morning, by way of adjustment, Garsington rolls out a summer of British talent that cannot, I suspect, be matched by any other company. Among the hot tickets are the Welsh soprano Natalya Romaniw in her role debut as Tatyana in Eugene Onegin opposite fellow-debutant Roderick Williams;  Toby Spence as Idomeneo; and this line up for Haydn’s Creation: Sarah Tynan (soprano), James Gilchrist (tenor) and Neal Davies (bass). 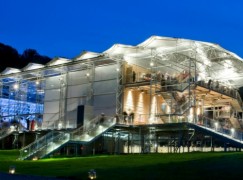 Garsington Opera’s 2016 season, from 3 June to 17 July, will present Tchaikovsky’s powerful Eugene Onegin, Mozart’s great opera seriaIdomeneo, Rossini’s sparkling L’italiana in Algeri, and an innovative collaboration with Rambert, one of Britain’s leading dance companies, with a unique realisation of Haydn’s The Creation combining music and dance.

Garsington Opera continues its policy of seeking out the very best singers from around the world and showcasing rising stars from Britain.  The distinguished Garsington Opera Orchestra, many of whom have been with the company for over 20 years, will be joined by the Garsington Opera Chorus, comprising emerging talent from the UK and beyond.

War hero Idomeneo, to be sung by international opera star Toby Spence making his debut in the title role, promises the gods he will sacrifice the first person he sees in return for a safe passage. That person is his son Idamante, to be sung by Australian mezzo-soprano Caitlin Hulcup.  Added to the anguished love triangle between his son, the Trojan princess Ilia, performed by rising star Louise Alder, and Greek princess Elettra sung by Rebecca von Lipinski, a terrible struggle ensues between fatherly devotion, staying true to a promise and young love.  Timothy Robinson (Arbace), Robert Murray (High Priest) and Nicholas Masters (Neptune) complete the cast.  Swedish Tobias Ringborg conducts with distinguished international opera director Tim Albery directing with designs by Hannah Clark.

Written at the height of Rossini’s inventive powers, madness, hilarity and a sense of the surreal permeate the opera with the courageous heroine Isabella at the centre of a maelstrom of confusion, suffused throughout with humour and tenderness. Ezgi Kutlu sings the young Isabella searching for her beloved Lindoro sung by the Brazilian tenor Luciano Botelho.  The blustering Mustafà is performed by Quirijn de Lang and his long-suffering wife Elvira by rising star Mary Bevan.  They are joined by Geoffrey Dolton (Taddeo), Katie Bray (Zulma) andBožidar Smiljanić (Haly).  Conductor David Parry returns to conduct his thirteenth Rossini opera for Garsington with Olivier award-winnerWill Tuckett directing and George Souglides designing.

Conductor Douglas Boyd, Garsington Opera’s Artistic Director, collaborates with Mark Baldwin, Choreographer and Artistic Director of Rambert, to bring an inspiring realisation of  The Creation through music and dance.  40 dancers from Rambert and the Rambert School of Ballet and Contemporary Dance will be joined on stage by Garsington Opera’s orchestra and chorus with soloists Sarah Tynan (soprano),James Gilchrist (tenor) and Neal Davies (bass).  Designs by renowned visual artist Pablo Bronstein, whose site specific work for the Duveen Galleries at Tate Britain opens in April, will add a spectacular visual dimension to Haydn’s music.