Who left her Stradivarius on a German train?

BERLIN, Jan 7 (Reuters) – An American violinist who left her $2.6 million 1727 Stradivarius in the luggage rack on a regional train in western Germany was “more than relieved”, police said, when officers retrieved it one minute before it left the station.

So who was it?

The train was running from from Mannheim to Saarbrücken.

The violin is the ‘General Dupont’, played throughout his career by Arthur Grumiaux. It was last sold at auction a year ago to an anonymous collector in China, after being on loan for several years to the US soloist, Jennifer Koh. 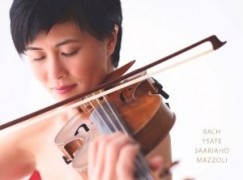 So who’s playing it now? All the news report says is that it’s a woman violinist in her 20s. Ms Koh is 39.

Ms. Koh is Musical America’s 2016 Instrumentalist of the Year.