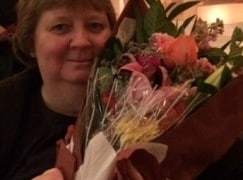 What to do when Maestro gives you flowers

The concert’s over. It’s been pretty good. Some flunkey or fan comes on and gives the conductor a bouquet of flowers. Which he then thrusts on you.

(b) blush and curtsy

(d) say thank you and dismantle the bunch, sharing it around your section?

Definitely not (d) we hope, though we have seen it done.

The question was prompted by this:

A lovely tour post by Melanie Kupchynsky of the Chicago Symphony second violins, titled: “Oh no. He’s going to give ME the flowers!”

Melanie writes:
I think I know why it happened.  Right before the last note of the Tchaikovsky Fourth Symphony, as I was watching him for the final cue, our eyes met for a split second, and I could tell that he was pleased.  I’m not sure if everything I was thinking and feeling showed on my face, but it went something like this:  “Russian music sure sounds different to me when it is performed closer to Russia, without an ocean in between…..I wonder how the Chinese people feel about Russian music……Wow, I love how Maestro is really firing up this last page, it’s faster than last time but it’s like the orchestra isn’t even breaking a sweat……the percussion section sounds fantastic…..let’s see where he is going to put this last note….BOOM!  applause……

It’s the sound of a happy orchestra.