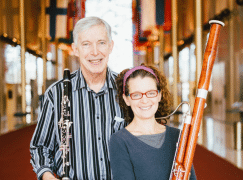 ‘We need somebody as dedicated as Slava was’

Loren Kitt is retiring after 46 years as principal clarinet of the National Symphony Orchestra in Washington, D. C. He has played Rachmaninov’s second symphony 54 times, with 15 different conductors.

Loren thinks the orchestra is now ‘the best it has ever been’, but it needs a music director who gives life and soul to the enterprise.

‘[Slava Rostropovich] was really invested in the orchestra.  He wanted it to be good. What I would like to see [in the next music director] is somebody who is as dedicated to the orchestra as Slava was. Someone who would hang their star on the orchestra, so that as good as the orchestra got, they would be better too.’

« A conductor counts the changes after cancer