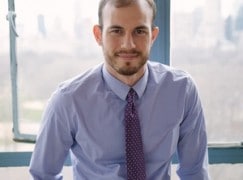 The US pianist who became an interrogator in Iraq

The violinist Stephanie Chase has been working with a gifted pianist of high pedigree. At age 9, Josh Cullen recorded a Mozart concerto. Later he recorded another with hs mentor, Paul Badura-Skoda. He attended masterclasses with Menahem Pressler and Andre Watts.

But after the 9/11 attacks Josh signed up for the US Army. He served for 12 years, part of the time as an  interrogator of al-Qaeda suspects. Here’s what he tells Stephanie in an interview:

Josh Cullen: I was seventeen on September 11, 2001. I had been at Juilliard for less than two weeks and I was sitting in an 8:30am ear training class when the World Trade Center was attacked. I wondered what impact I would have on the world as a classical pianist, a re-interpreter of the great canon of piano repertoire that had already been perfected and recorded for eternity by all the piano greats of the 20th century. I remember going to the American Red Cross in the days following September 11th and volunteering to help, but they didn’t want my help. Did I speak foreign languages? Did I have medical skills? Did I have universal donor, O negative blood? We had just been attacked, and New York City wasn’t looking for any more concert pianists. They needed real people with real skills. …

I joined (the US Army)  initially as a translator, learning Korean for a year and a half before learning that my first deployment would be to Iraq, not to Korea. Although my degrees were in music, the army saw that I had a master’s degree and quickly promoted me to the rank of sergeant and had me oversee interrogations at a detention facility in Tikrit, Iraq for my first assignment. The learning curve was steep and the adjustment to the culture of the U.S. military was challenging, but after a couple of years I developed “competence”…

One of the things I didn’t expect to learn on my first deployment to Iraq was how much the U.S. troops relied on music and movies for comfort and to maintain their sanity. Whenever the infantry troops were resting between missions, they were listening to their iPods and watching DVDs. Of course, some of them played video games too. But for the first time in my life I realized how music universally speaks to people, and it wasn’t just something they did to kill time. I saw how it restored their interest in life, how it renewed their energy and improved their mood – it might sound ridiculous, but it really fed their souls. And some of these soldiers actually listened to classical music. I remember one infantry sergeant I served with in the 82nd Airborne Division had brought his violin with him. I was astonished. This was an important realization for me as it validated the idea of being a musician as a profession.

« Aix festival president is no more