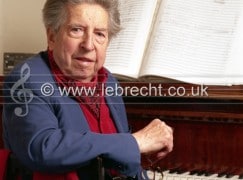 The Dutilleux year starts in … Wales

This is weird but rather wonderful. The centennial of a Gallic composer will kick off in les pays de Galles.

Cardiff University School of Music is collaborating with the BBC National Orchestra of Wales to mount a tribute to the internationally-acclaimed composer Henri Dutilleux (1916-2013).

A series of orchestral and chamber music concerts featuring Dutilleux’s music at St David’s Hall, Hoddinott Hall and Cardiff University Concert Hall starts on his centenary day of 22 January 2016 and continues into March.

Dr Caroline Rae, Reader at the School of Music, said: “Henri Dutilleux was among the greatest and most celebrated French composers of the 20th and 21st centuries. Heir to the tradition of Debussy and Ravel, his music is characterised by that most French of attributes – magic of timbre.

“It is fitting that Dutilleux’s centenary will be celebrated in Cardiff as he had connections with the city. He was made an Honorary Fellow of Cardiff University during his visit to the city in 2008 for the BBC Discovering Dutilleux Festival organised by the BBC National Orchestra of Wales in collaboration with Cardiff University.”

Alongside the series of concerts, the School of Music will also host the Dutilleux Centenary Symposium and present a day of talks by eminent composers and scholars investigating Dutilleux’s music and legacy. Speakers include Eric Tanguy, Julian Anderson, Caroline Potter and Caroline Rae. The opening address will be presented by Her Excellency Madame Sylvie Bermann, Ambassador of France to the United Kingdom, will present the opening address. Admission to the Symposium is free.

Dutilleux’s music will also be featured daily on BBC Radio 3’s acclaimed Composer of the Week from 11 to 16 January 2016. Dutilleux scholars Caroline Rae and Caroline Potter join Donald Macleod in an investigation of his music.