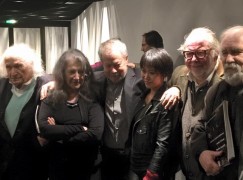 Rosana Martins, in Rio, has shared this backstage get-together of four old pals and one new at the Philharmonie in Paris.

Rosna writes: The recital took place in one of the small halls in the Philharmonie and was organized by André Furno, the founder of the concert series “Piano **** ” in homage to his late wife. All the artists travelled performed without fee, including Elisabeth Leonskaja, cellist Edgar Moreau and Valentina Lisitsa. It was a private concert only for invited guests, among which were Alfred Brendel and Caecilia Bartoli, very good friends of the deceased.

The second from the right is Didier de Cottignies, the Orchestre de Paris artistic advisor, who was there as a guest.

The rest are used to having their names up in lights.