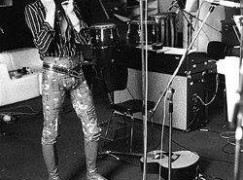 Secret history: David Bowie and the ghost of Chopin

From a Paris correspondent:
“David Bowie est un fantôme.” These were the words that opened the solemn voiceover of a FranceTV documentary last Wednesday, days before the rock star’s death. The programme, titled Bowie, l’Homme Cent Visages ou Le Fantome d’Hérouville (The Man with 100 Faces or The Ghost of d’Hérouville), explores a curious idyll in his prolific career, two stints in an historic, sprawling manor in the French village of Hérouville, 45km outside of Paris.

The composer Michel Magne bought Château d’Hérouville in 1962, and transformed it into Strawberry Studios.

The rooms where Frederic Chopin and George Sand once made love were rocked by the sounds of Pink Floyd, Iggy Pop, Grateful Dead and Jethro Tull. Elton John named his 1972 album Honky Château after the place where it was recorded.

Bowie recorded his Pin Ups cover album in the Château d’Hérouville in 1973, sampling Bach’s Brandenburg Concerto No.3 (at 4:00) and (briefly) Strauss Also Sprach Zarathustra in the song ‘See Emily Play’. 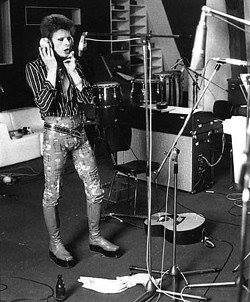 He returned in 1976, a recovering cocaine addict, for Low – the first in a Berlin trilogy, actually recorded in France – a masterpiece and his most advanced album up until that point.

In the TV documentary, Dominique Blanc-Francard, a sound engineer working on the 1973 sessions, said: ‘When he looked you in the eyes it was like he was piercing you with lasers, it felt as though someone was rummaging around in your thoughts…Out of all the clients we had at the chateau, he was the coolest. For that time, he had such a bizarre look, really like an alien. One couldn’t imagine him being human.’

Bowie complained about the diet of rabbit and potatoes. More troubling, according to his collaborators on Low Brian Eno and Tony Visconti, were visitations by a ghost, and a bedroom Bowie refused to sleep in, believing it was haunted.  By Chopin, perhaps?

Strawberry Studios shut down in 1985, a year after Michel Magne’s suicide. The chateau remained derelict and was finally put up for sale in 2013 with an asking price of €1.29m (£1.12m). A group of sound engineers has taken up the challenge of restoring the honky chateau to its former glory, and are seeking investors. (See below for contested claim).

They hope to reopen Honky Chateau this year. The piano used by Elton John on Goodbye Yellow Brick Road is still there, rotting away in the attic.

« An orchestra will start to die tonight