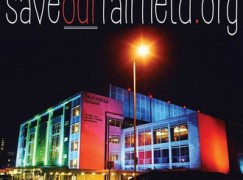 No classical concerts in South London for at least two years

It’s going to be bleak if you live south of the river.

Fairfield Hall, the only concert venue on the less fashionable side (except the South Bank Centre, which hugs the river), is to be shut for two years for much-needed refurbishment. At least two years, the authorities say. And no alternative venue is being booked.

Campaigners are up in arms. South London deserves better.

For some reason, no-one is considering it as a site for the Simon Rattle vanity hall.